Your name is Robert Hughes, and it does not rock to be you right now. If it weren't enough to be exiled as a traitor, the very island you desperately struggled to reach, where it was said you could find people looking for a cure for the plague currently running merrily through your body, appears to have come down with a bad case of oh no oh no everyone's dead. And if you can't figure out how to synthesize a cure from the plants and fungi around the island, you're going to be next. But hey! At least it isn't like there's anything else malevolent and deadly stalking your every move, just waiting for the right moment to pounce when the fever is worst and you have nowhere else to run, right?... right? IonFX Studio's indie action exploration-geared adventure Miasmata delivers a tense fight for survival on a lonely island where you'll have to rely on your wits to stay alive as you scour the landscape searching for the things you need to create your cure and conducting your research. 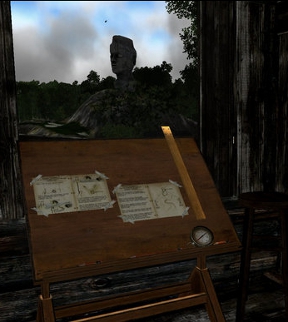 Step one: Hit [ESC], open the options menu, and set the inverted controls to "normal", because ugh, inversion. Once you're playing proper, move with the [WASD] keys, right click to view your compass and watch to help you triangulate locations, left click to interact, and [TAB] to open your journal. Your journal is pretty handy, since it keeps everything from your health (gross and disease-ridden), to the medicine you create, to all your notes and research. Time passes as you explore the island, and you can bet it's going to take you a while to do so. Since movement is affected by momentum and the terrain you're on, don't go galloping about willy-nilly unless you want to go sliding down a cliff or unable to stop yourself from falling. If you don't want to get lost, you'll make a point of using simple cartography to map locations and objects of interest as you go, and, uh, tread lightly, yeah? You're not exactly alone on the island, and if you go blundering around, you might find yourself in a sticky situation. There's a beast in the wilderness that can smell, see, stalk, and even trap you, and face-to-face confrontation is probably not going to work out in your favour unless it turns out to be a germaphobe. I mean, okay, fighting for your life in a hostile environment, but would it kill you to give your filthy bloody hands a little rinsey-poo in the water?! Ew!

In addition to taking care of basic needs like water, and sleep, your main objective is ultimately to create a cure for yourself using the dozens of plants and fungi around the island. Early on you'll gain access to a lab that explains the process in detail, but the basic gist of it is that you find and research specimens by chopping them up and examining them, then either combine them with something different or work with them alone to see what you can make. In addition to the all-important cure, you can create several helpful medicines. Normally, I'd advise against just shoving home-made pharmaceuticals in your mouth, but you don't have a whole lot of choices here. If you die, you'll start back at your last save, so remember to sleep and turn on light sources whenever you come across them to save your game. 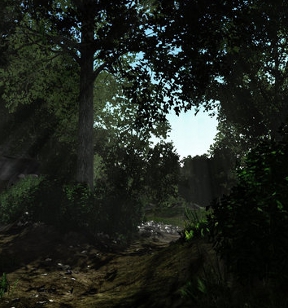 Analysis: Miasmata was built from the ground up on its own engine, and apart from a few hiccoughs here and there, it really is a strikingly lovely game. While blood looks sort of like ketchup pudding and water pouring looks like lumpy tapioca (I'm hungry, okay?!), it really is lovely to stroll around and admire your surroundings. More than once I had to just stop and admire a sunrise or sunset as the clouds rolled across the sky, and the wilderness teems with life and vibrancy on top of having some realistic and well thought out topography. The downside is that a lack of real direction means you'll strike off into the unknown and can spend literally hours wandering around without much happening or even encountering the creature on the island with you, period. That's not to say there isn't a lot to seek and find, and it's a good thing, since finding what you need to make your cure means trekking all over the island and tracking down everything from plants to bloody research notes.

The actual gameplay is fairly clever, if punctuated by long bouts of wandering around with nothing happening. The realistic pitch and momentum takes some getting used to, but the more time I spent with it, the more I liked it. It adds a touch of realistic panic and a level of immersion you don't normally get from games like this. The game is excellent at creating a lonely atmosphere, and the panic you feel when you take a tumble or are staggering around when a fever is high and you can't find shelter is palpable. One niggling annoyance is that there's no way to tell if you can interact with something until you're right on top of it, so you can spend hours wheezing and gasping as you pull your filthy, disease-ridden body up a hill only to find those lovely, eye-catching pink flowers you spotted from across the water actually aren't one of the dozens you can even pick up. The cartography system is also one of those things that is a neat idea, but actually a little tedious when put into play even if it is realistic.

Miasmata is a really good game, but it's a good game for the type of person who enjoys slow, careful exploration and realistic survival scenarios, and as such the lack of a demo could wind up hurting it in the long run because it really won't be for everyone and I think being able to try it out for a test run would really be the best option. The actual monster took around four hours to encounter during my first playthrough, and while I can't say I found it particularly scary, its stalking behaviour was actually fairly creepy to witness, as it wound crouch down in water or grass to lower its visibility and slowly prowl after me, herding me into steep valleys. Miasmata's gorgeous environments and encouragement of methodical adventuring and gradual storytelling makes it stand out from the pack, though its uneven pacing and abstract approach to narrative means it'll take a particular type of audience to really appreciate it.

I've been playing this for a couple of days and was blown away by it. This is the kind of survival/realism game I've been wishing for for a long time.
I feel very connected to this world and with my character. Not very many games can accomplish that.

"Step one: Hit [ESC], open the options menu, and set the inverted controls to "normal", because ugh, inversion."