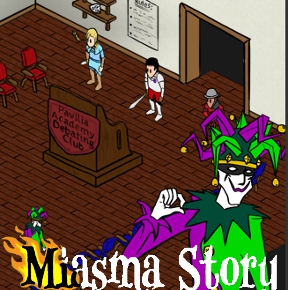 What is it about jester suits that instantly turns a person evil... aside from the maddening jingle bells? In Cranktrain's short turn-based strategic RPG Miasma Story, three Town Guardians arrive to find their leader dead at the hands of a mysterious figure who can command the monsters rising from the abandoned Academy ruins.

Fights are handled in a turn-based, strategic style similar to the Final Fantasy Tactics series, though not quite as complex. Click on a character to be presented with a menu that will let you move them around the field, attack, use "Miasma" (the game's version of "magic"), and so forth. Each character has their own unique abilities, and as they level up you can spend points in their attributes and buy them new skills. Martin, for instance, gets to sling elemental spells around, while Jon can inflict negative statuses on enemies and August, as the girl, gets to heal everyone's boo-boos.

At around an hour or so, Miasma Story is a relatively short game without much replay value to speak of, owning largely to the non-interactive narrative and linear gameplay. It sort of feels as though someone ripped a handful of pages out of a book and handed them to you rather than giving you a complete story, especially since the ending doesn't really resolve anything or answer any questions. Still, as the first step in what is hopefully the direction for a bigger tale, Miasma Story is a nice way to spend a break in your day, and shows a lot of promise. Remember kids; Miasma... not even once!

Ikh. I didn't like this game at all. The animation was really poor, especially the 'walking' animation, which looks like their half hopping and half kicking an invisible something in front of them. Also, the story seemed kind of... shallow. It was really slow, and I couldn't tell what the characters were doing most of the time- they would randomly flinch, it seemed like.

The game didn't pull me into the story (which was roughly put together) nor required a lot of strategy in my opinion. But as the review said, it's an okay break game and hopefully will lead to a greater game in the future.

Although the animation wasn't the best. The strategy was fun and the story has a good cliff hanger. I hope there could be a miasma story 2 one day.