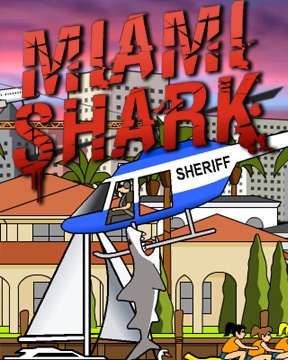 Ow! My wrists! Being a shark is HARD! But finally a piece of art has arrived that not only addresses the bad rap that Jaws gave these water-bound predators, it totally annihilates it! Eat your heart out, Steven Spielberg, because if Miami Shark from Mausland teaches us anything, it's that sharks are AWESOME. Providing you are the shark. And you can drag stealth bombers down. From the sky.

In a way, though, we still have to tip our hat a little to that franchise, in particular Jaws 2, in which a shark manages to pull a helicopter out of the sky. I suppose you can also credit the recent Asylum z-movie Mega Shark vs. Giant Octopus, where a giant shark attacks an airliner. Because in Miami Shark you do both. The object of the game is very simple. Within a set amount of miles you have to chew your way through as much destruction as possible. Swim with the [arrow] keys, and bite with [ctrl] or [A]. Chomp up swimmers. Gnaw through boats. Swallow up scuba divers and packs of dolphins. Leap high into the air and drag down helicopters, Boeings and a few aforementioned military aircraft.

There is very little strategy here, though if such subtleties do exist, it's pretty easy not to notice them. You have to time leaps to grab onto flying vehicles and destroy anything bigger than a swimmer, but it's hardly as technical as it sounds. Destroying things creates combo chains, which obviously raises the score. The objective is the high score at the end of the run, which you can submit. In all honesty it does get a bit stale after a while, but you won't regret wasting some time on Miami Shark. It's a slick little game that looks good and plays well. And you are a shark that eats airliners. Why are we even debating this?

You can also view stats at the end of your run, which shows the time it took you to take down each aircraft, and which of those still remain. I'll get you next time, B-2 Spirit...

This was a welcome break from my piles of work today. Great fun.

(The(start)button sound is from Miami vice).

I had forgotten how much I enjoyed this. So satisfying. Especially the first time you prevent the Space Shuttle from being returned to Cape Canaveral.

That'll teach those astronauts from missing their window to land in Miami the first time around.

I love this game. Mausland is hilarious, although it can be inappropriate for younger kids. The game as given by the link was cropped about a half inch on all sides, but when I went to the game's website then that problem is gone.

There is something soothing about bringing down airplanes and ducks to meet an explosive doom.

I think it is safe to say that this is the best game ever.

I think my favorite aircraft to take down was the NASA plane carrying the space shuttle.

This game is AWESOME. No scratch that, it's THE GAME OF THE YEAR. I mean, really. You are a SHARK that grab on to JUMBO JETS and bring them into the water. Why were they flying so low in the first place, though? They can see the fate of the airliners in front of it. Pilots (and everyone in the water too) are dumb. That or they're suicidal.

Finally. This is still one of my favorite games from the last few months. Seriously, "Imma let you finish, but Miami Shark was the most epic shark OF ALL TIME!"