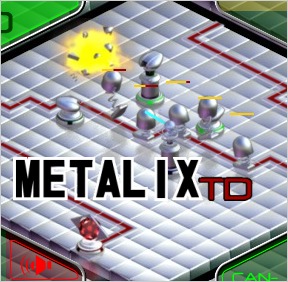 Apparently the designers over at PointZero Co. also shared this peculiar combination of things to like when they sat down to design Metalix TD. Besides being a top quality tower defense game, it's also undoubtedly very, very shiny.

At first the game appears quite sparse. An ominous glowing red line that makes a path toward what can only be a rotating red crystal you have to protect. There are no specific build slots to build your towers. You're free to build anywhere. Nothing really new yet, so… Place a few shiny towers near the red line and start the first wave. You'll decimate some robots that look like very shiny waddling eggs. As the last one explodes in a tiny screaming mushroom cloud you'll get the satisfying "Wave 01 Completed" and start feeling comfortable. You've done this before. You can do it again.

And then the red line moves.

Those carefully placed towers (the ones you set so carefully on corners and other strategic places) are suddenly not quite so strategic. If towers happen to be on the red line and get hit by a shiny robot, they'll take damage and eventually explode. Fortunately, the designers thought of this and gave your towers the ability to move.

And here the subtle brilliance of Metalix TD becomes apparent. The entire strategy of the game is so wonderfully dynamic. It'll be rare you'll ever have a massive surplus of gold but moving a tower only costs 5 gold per square. This allows towers to slowly strafe the red line, unleashing rockets in a shiny mini-Armageddon.

With the exception of the "path of invasion" changing, Metalix TD plays like most tower defense games. Buy a tower, upgrade a tower, heal a tower, etc., and has well written instructions that explain the functions of all in-game interface options. It's that one exception that makes it so much fun to play and hard to master.

Analysis: When a game comes along that changes something so fundamental about its genre, it makes sense to pay attention. With Metalix TD you get all the usual tower defense conventions, like tower upgrades and wave types, but the gameplay experience is quite unique. The red line the robots move down is randomly selected, which definitely adds to the replay value. In later levels it's an increasing challenge to utilize a tower's ability to move, especially when towers cost more each time one is bought.

The graphics are smooth and, well, shiny. The variety of enemies is interesting and sometimes amusing. The sound track and sound effects all fit amazingly well to make for a pleasant experience. The ability to fast forward some of the early waves would be a nice addition. So would a save feature.

Metalix TD offers a refreshing change of pace to the tower defense genre. It can get be a little frustrating watching a tower move just a little to slowly to catch that boss ball rolling toward your crystal (and you don't have the gold to upgrade its speed)…but that's when you can sit back and take pleasure in how everything is just so very, very shiny.

Thanks to Shazbot for suggesting this game, and to Icenine for reviewing it!

I am having a really hard time figuring out a viable strategy that prevents the game from going from pretty easy on one level to completely impossible on the next. I think it has something to do with the fact that I have not gotten used to the idea of moving towers yet.

For all its futuristic feel, the currency is still "gold"? Why not "Credit" or "$" or even just "money"? I know I'm nitpicking, but that's the only thing that 's out of place here. From what I can tell, the Movement upgrade makes the tower move faster, but what about "Quantity"?

Hm, Canon towers are the cheapest and fire bullets at the nearest metal animal critter; lasers are more expensive, but have a longer range and sustained damage; Fire towers deliver one attack every so often, and are unreliable. They can cause some critters to stop momentarily, but the fact that they can't be trusted to time their attacks with the Metalix critters closing in, they have to be bought carefully, if at all.

I'm pretty sure Quantity makes the towers fire faster. Unlike the reviewer (no offense meant, of course), I don't think the instructions are that well written--or translated, I should say. But the game seems to follow (most) standard TD conventions, so it wasn't too difficult to figure out.

Except the part about moving towers, which I'm still apparently not good enough at.

hi.. its wonderful. i really like this game. its absolutely quality game. thanks for sharing.

Yikes! The difficulty curve suddenly becomes a vertical line, climbing into the clouds. It's a challenge buying rapid enough movement and a workable towers for even the early rounds.

Yeah the difficulty suddenly goes through the roof! Anyone made it past lv.16????

Couple of points to address:-

1 - when more than a few towers on the field can be very tricky to pick and move the correct tower. This can be very important if the moving towers is so important.

2 - I wish the pathfinding could be switched to other options to avoid traffic jams! (ie. along 4, up 1 OR up 1, along 4 WHERE both are the same destination.)

3 - the boss battle (only got to 1 suffer greatly due to the random path...I feal they can be easy or downright impossible due to the path you get!).

4 - I agree with reviewer that a speed up option is required...I am sick of playing the first 9 levels now!

Otherwise a fantastic addition to the genre, cant wait to see where this 'movement' takes TD.

I can't get past 10. And you know what? I give up. I don't care anymore. You can't retry a level or speed up time, so it's very tedious to try different approaches.

This game is way too slow. Makes it really boring to play more than a couple of times.

Pretty much a fail...

Made to level 20 - only to have to start all over again because a single enemy made it to my full strength base. :( Fun but extremely frustrating.

you have to give this game a chance. it's definitely an acquired taste - at first it is hard to figure out strategies that work, but then you start to catch on, and it is very interesting. a general hint:

building a small number of towers, even just a single laser and a single cannon, will carry you a long, long way; the fire paralyzing thingy becomes helpful only later.

and here is a spoiler for how to win the boss battles:

the only way to win is to have at least one, usually two or more, powered-up towers with exactly the right speed to follow the boss(es) all the way along the path from start to finish, slowly strafing the whole time

There's a sequel of this game, 'METALIX RPG' on the developper's site.
It's a kind of Rogue clone.

Well I've beat the game once... Haven't been able to do it a second time.

Buy 1 laser to start, upgrade it to power 3, range 2, quantity 2 (not till later for quantity), movement 2.

At the first boss level upgrade 1 of the towers to movement level 3 and follow the large ball around with it.

Upgrade the 2nd tower to movement level 3 when you reach the level with 5 "boss balls" (hahah).

Add a fire tower soon after this, upgrade it to range 4, quantity 4, power 4, and movement 3.

At this point the game gets considerably more difficult. You get lots of strong slow movers + strong fast movers together in the same wave. lvl 36 is typically where I die, I can't seem to devise a strategy that lets me win consistently... Upgrading the lasers or the fire tower is incredibly expensive here, and the cannon tower just sucks...

I can get to level 33 starting with a cannon and then getting two lasers... but how you get past level 33 I have no idea... those birds are just two fast and hard to kill.... I guess I need to start toying with the fire tower.