You are in the middle of the sea. There is a locked door in the tree above you. You have to get it open. You don't have many tools, but you can run and you can jump and, most importantly, you have a mouth and you must sing! Melodisle, a puzzle platformer by Andrew Gleeson, is a pixelated game of tones and melodies. Unlike most music games, rhythm is barely involved. Rather you must use your character's voice to affect the environment in a multitude of clever ways. 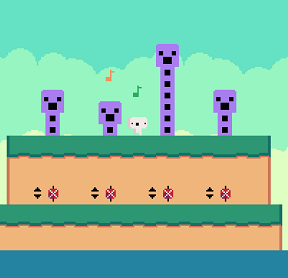 Move your character with the [arrow] keys to scout the islands, jumping with [Z]. When you come across machinery to manipulate, you will do so by holding [X] and using the [arrow] keys. However, the central mechanic of the game is tonal: pressing [A]-[S]-[D]-[F]-[Q]-[W]-[E]-[R] will sound the respective pitches of a do-re-mi-fa-so-la-ti-do scale. In different locations, these different pitches will cause various things to occur. In general, though, your goal is to collect the eight colored magic eighth notes that will form a... sigh key which will unlock the exit door.

While Melodisle may look like a musical adaptation of Fez, that's hardly its only influence: people who've spend time with a certain green ocarina-wielding lad may be at a bit of advantage in some parts. Generally though, the game's emphasis on exploration and experimentation brings to mind nothing more than Myst, with its soothing atmosphere and puzzles that draw you in before you realize just how complex they've gotten. Then again, Melodisle also has Myst's lack of explicit direction, which means while many of the puzzles will make you feel pleased with yourself for figuring them out, there might be one or two that leave you vexed for not being able to read the author's mind. However, Melodisle is probably too compact to leave players seriously frustrated for long. It presents an impressive amount of creativity in a small package, and would be an impressive presentation by any author, let alone a professed newbie to game design. Players with an ear for the experimental will find it a charming delight. Now if we could just figure the right way to pronounce the title... (Until I hear a compelling argument otherwise, I'm going with "Melo-dizzle").

I've been pronouncing it "mellow-dial" :)

It's really a lovely game, and the music component is very enjoyable. Definitely brings me back to my ocarina days. :)

From the description, it makes me think of the LucasArts game Loom. Will definitely give it a go tomorrow :)

Looked like it was fun, unfortunately inability to change keys = i can't play this game as my down arrow broken ;p

That's a good comparison, actually. Of course, I think I already used my year's allotment of Loom references in my Proteus review. :)

Awesome game made by a fellow Aussie! My only criticism would be the respawning which saw me leaping off the place where I'd fallen ten+ times in a row. Other than that I'm surprised this is a first time effort by a game designer. The artwork, mechanics and puzzles are all very slick, I'm impressed.

Also, considering I usually avoid music puzzles this is actually quite forgiving of the tone deaf. Maybe not so much on the colourblind though. Mmm... irony.

So the bird puzzle wasn't great, and I don't understand the Zelda one. It doesn't matter to me, because I got to

SING TO AN ADORABLE BABY MUSHROOM AND HELP HIM GROW UP.

I literally restarted the game immediately after it so I could sing with the mushrooms some more.

Awesome article! And a walkthrough too, wow.

The correct pronunciation of Melodisle is actually "Mellow-dial", as Jay said. You could say it's short for "Melody Island". Hopefully that satisfies as a compelling argument :P.

You guys are awesome though, thank you so much! I plan to revisit Melodisle and turn it into a much larger and refined experience. But I would like to make a few more smaller games before I try and attempt to do that! :D

Its a good game. It was pretty fun while it lasted! :D I didn't get the Zelda reference too, had to go google it.

To andrewgleeson01:
When you get to remake it, I'll love to play it! :D

Nice game, but Gomez where is your fez?:D

Aughh I was totally gonna get try this and then "Not available for Mac". :(