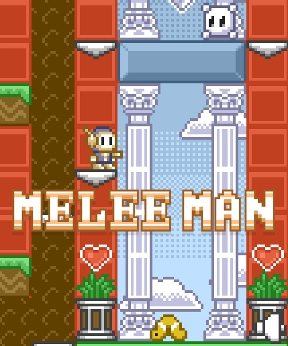 The title of Melee Man, a pixelated action platformer by The Village Blacksmith (formally of Epic Shadow) and David Vs. Goliath probably was decided on before the game was developed. First of all, the guy has a gun and sucks at melee. Secondly, he looks a lot more like that dude from Dig Dug than Dr. Light's creation. Thirdly, it was put together in a week, so it's probable that redoing the title screen wasn't high on the priority list. Onomastic incongruity aside though, it's a really nice game. It's designed to the 160x144 resolution of the Gameboy Color, and, along with the kicking chiptune soundtrack, truly feels like an unreleased prototype for what would have been a really cool cartridge. It's not perfect: the backgrounds are often cluttery, making it hard to tell what is a land-on-able platform and what isn't. Combined with the finickiness of some of the jumps expected, this feels a little unfair. That said, Melee has a nice difficulty curve and that overall old-school feel that all retro games aspire to. In conclusion: Pew! Pew!

It's not original, level design is deceptive, uses several internet memes, the visuals are polluted enough to the point where is difficult to distinguish between foreground and background.. still I can't stop playing! it has its charm :)

Put together in a week? No wonder! I agree with Diego the foreground and background can get confusing and the game is littered with signs with old internet memes and the boss is a combination of Newgrounds angry emoticon face and awesome smiley.
Why is it called melee anyway, this teaches us that we should not rush to make stuff like this.

PS:JIG, what did you do with the ads they are alive and the game screen becomes into a youtube ad before turning back into itself.
And your captcha is getting buggy.

Definitely the sort of game I could envision being played on that dusty old gameboy. Also, the challenge levels were superb - some much needed difficulty. :3

It could really use a safe function. Nothing like losing a boss battle because you have to step away from the computer for a moment and can't pause.

Am I missing something? The first 14 levels never take more than a couple of retries, but level 15 (the second boss) has been taking me an hour?

And I beat the guy, too. Got a medal to prove it. However, when I go to the level select screen, the door for level 16 is locked, so I have to beat the guy again...

Other than this, the game is okay. Nothing special, but enjoyable (except for the last hour, attempting to beat that guy...)

(brandishes club) Who programmed Level 12? Who thought it was reasonable to expect me to get past a veritable plague of worms that are so densely packed that I can't get the room needed to shoot them & with spiked worms mixed in so I can't just jump on them?

Seriously, though, I'm stuck on Level 12.

Okay, just got past it, but it's still a ridiculous amount of enemies.

And of course, the last level involves

*two* smiley faces, both delighting in teleporting to the exact same spot I was standing

Fun little game - quite challenging towards the end too, though funnily the final level seemed easier than some of the earlier ones. Some problems though:

level achievements do not seem to work.

Quick Like Ninja! on C3 despite it being a C5 achievement.

Complete levels 1-C5 in one session without dying