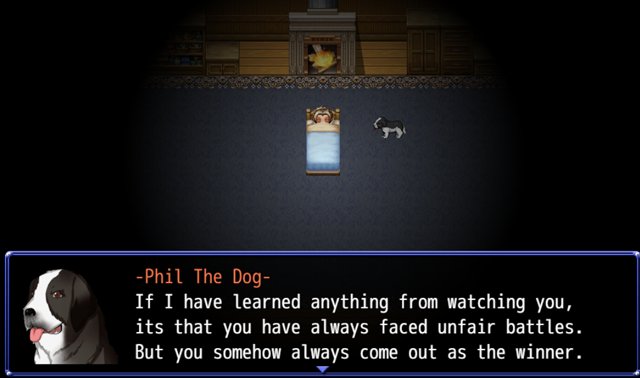 Note: Before playing this game, you may wish to check out the previous episodes in the series, or at least Parts I and II of Episode 8. Some spoilers lie ahead!
The previous two parts of Episode 8 - Deathwish - have chronicled the adventures of hero Dregg Moriss in a very hot place. After eagerly bargaining with the Devil to try and have another chance to find (un?)happiness back in the real world, he has been granted his wish and allowed back to the land of the living to try and complete a dangerous mission. After seeing his friends trapped in some hybrid of fantasy and reality and helping to break them out of their respective trances, he is quite hopeful that it is finally the end.

Alas, it is not going to be so easy for Dregg. The Spirit Realm has laid a claim on his soul, and he must escape its clutches to return to the land of the living! After being found laying unconscious but alive on the beach, the doctor in the real world cannot figure out what is wrong with him. The talking dog, Phil, attempts to impart some advice, which you hear as the main character. You will have but 24 hours to escape the Spirit Realm; else the claim on Dregg's soul is considered absolute and, literally, neither Heaven nor Hell can interfere afterwards.

Staggering around a bleak landscape and drifting snow, you first search for the parts of Dregg's shattered soul. As you find them, painful memories come flooding back: other kids from his youth taunting him, the overheard words of their parents discussing having theirs stay away from him for not being "normal," how even his mother abandoned him and how he must be a "spawn from hell...," and of course an infamous childhood episode where he tried to burn down the local post office. And those are just the beginning.

After gathering up these fragments Dregg shouts to an unknown voice that if anyone has a problem with him and the way he is, they can go to Hell. This is slightly ironic considering Dregg's most recent predicament, but he carries on anyway. The voice announces that Dregg is being welcomed to his own conscience, and it is up to him to find his way out of it. You will need to answer series of questions about what to do when confronted with a problem, a situation of some sort, or an opportunity. The twist is that you must answer these questions with the frame of Dregg's mind, not the most obvious answer that springs to mind. You'll have to channel your inner pessimist and think deeply to choose correctly.

Use either [WASD] or click with the mouse to navigate through puzzles and areas. You'll find usage of the mouse to be preferred and less awkward. (If you do go with the keyboard, turn on "Always Dash" in the options menu.) You can left-click or press [Enter] to confirm a choice or bring up the pause menu with this and other options. Only you can snap Dregg out of this mess, so dive right in and do your worst...I mean, best!