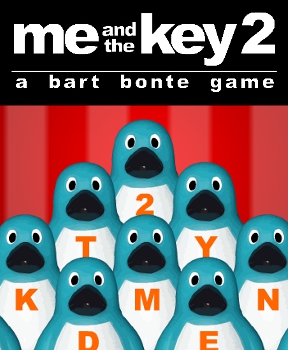 A little more than a year ago, Bart Bonte's Me and the Key sent us all on a voyage of self-and-key-discovery. But the hunt for the self/key is an eternal quest, is it not? Luckily, the journey has been lengthened by another 25 levels in Me and the Key 2. As you progress through this series of abstract thinking puzzles and mini-games, maybe you'll discover that the key that you were searching for was around your penguin-thing's neck the whole time. Truly, a moral for the ages.

The goal of this game is always simple: find the key and click on it. It's the finding of it that's the hard part. Figuring out the controls in this game is often the entirety of a puzzle, but I can tell you that both keyboard and mouse will need to be used. In some levels, looking for clues is important. In other levels, trial and error will show you the light. If you're stuck, it never really hurts to click around the screen frantically or hammer on the keyboard until something happens.

Analysis: The weakest part of "Me and the Key 2" is the mini-games. It isn't really a spoiler to say that they are clones of the classic snake and breakout genres. You could pull someone who's been in a coma since 1987, plop them in front of the computer, and they would recognize what game it was within five seconds. They would then, perhaps, say, "You woke me up from my coma for this?" and they would have a point.

But it would only be fair of you to leap to the game's defense. "Ah, but check out the puzzle levels!" you would say. The puzzle levels are mostly fantastic, lovely little bite-sized brainteasers that play with your perceptions and require some definite out of the box thinking, and fortunately, puzzle levels outnumber mini-games greatly. In fact I would only count four levels as true mini-games. Unfortunately, the very last level is one of the mini-game levels and this ends up as a bit of an anticlimax. Still, the game overall more than delivers that Bonte charm we know and love.

Play Me and the Key 2

Me and the Key 2 Walkthrough now available!

Me and the Key 2 walkthrough

Great game. I love games that make you think.

Ugh. The mini-games are just about intolerable. It might just be that I prefer puzzles and mysteries, but one would think that by 2010 people could come up with more original stuff than Snake and Breakout.

I'm stuck at # 12, I read the hint but it does not work for me! Anyone else stuck there?

Type all the letters that you see to pop the balls on the screen. When you get down to just K-E-Y, the key will appear.

Me and the Key 2 walkthrough

Man, level 24 took me more tries than I would willingly admit :\

I liked it until the last level, at which point I gave up...

Had a problem with level 25 breakout control -- mouse would freeze up and had to start over too many times... otherwise, great game. Thanks!

Thanks Joye, that's exactly what I was doing, but nothing happened. Keyboard is working fine so it must be a bug. I switched browsers and it worked.

I turned the quality down to low and zoomed out to make the flash movie smaller and it's still really slow.

To anyone stuck on the last level and wondering if it's worth it: although beating the last level is the only way to see the super-cool JIG logo, other than that, there's not much to see. If you're going mad with frustration, don't sweat it.

To clarify what's happening in 17:

Enjoyed it at the beginning, "finally one of these puzzle game, without stupid arcade sequenzes thrown in", then came level 14... unnecessary (same for 25, not original), otherwise would be a fine game.

those of us with little to no peripheral vision will never get past #24.

yep, two rage quits on level 14 here too. great game up till then, but i probably won't go back.

I managed to get 14 eventually.

17 is a problem if you do not have a large area for the mouse.

All level 24 requires is to cut up a post-it note and stick it on the screen wherever a ball appears. :-)

I found the game to be challenging and fun. Made it to the end, some people might think that when they win this it's not going to be worth it, but it could be like catarsis to some people.

Mantaraya.
I wish i had thought of that!

Nothing too hard - had to repeat a few levels once or twice, but I got through it relatively easily. Still fun, though.

Level 14: Really, Bart? ANOTHER snake level but harder? You're more creative than that.

This coming from a player who has always enjoyed your games & given positive reviews (go ahead & check) except when you resort to *ahem* laziness.

I managed to complete every level, but the design was weak. The snake only being able to turn left? Ridiculous, especially at the prolonged level. A lot of the actual puzzles were just trial-and-error, with little to no clue as to what you were supposed to be doing. I'm not even going to comment on how bad the breakout level at the end was.

Seems to me this was not the puzzle game it was billed as.

Man, I HATE level 14. And snakes who bite their own tails.

On level 9, I wait for the thought bubble and then the key pops up an i go to click on it but it disapears. WHAT DO I DO?

for level 9, you can't move the mouse, or else the thought bubble disappears. You have to position the mouse in a spot on the screen where once the key appears, it is already located behind the pointer without you having to move it. When the key is already on the pointer, click on it.

There is no more game beyond level 6 because no one has ever made it past level 6. Anyone who claims otherwise is lying.
(yeah, I ragequit... how could you tell?:)

For those who are stuck on level 14:

If you go more or less completely around the edge of the screen and only go in to get the balls then as long as you don't go inside your own spiral you should be fine ;)

There just wasn't enough new content here to make me want to slug away at the interminable and uninspired levels to this game. The clunky graphics slow down the whole game and the lag is debilitating here. Not one of the better Bonte titles.

5,806 Views
5 Comments
chrpa— Jayisgames needs your help to continue providing quality content. Click for details In their latest game, Rinnogogo tells story inspired by Japanese folklore about Kaguya, a princess from the Moon. The story, set in the present day, has the...  ...