Warning: This game contains flashing elements which may trigger photosensitive seizures in people with epilepsy. Fond of dungeon crawls? How about classic RPG themes with plenty of races and classes? Feeling a nostalgic for the days where you had to switch out floppy disks to continue on to the next chapter of a game? Then 68k Studios is here for you with their mobile game Mazes of Karradash for Android and iOS! This retro adventure game stays true to its inspiration of ye old days with its pixel art and even the sounds of floppy discs being read. Your goal is to build up your town with the money gained by adventurers diving into the Maze. While they don't come back alive, their gold makes it out intact, which lets you build more houses for new races to come and join, or more academies for learning new classes, as well as other buildings that help improve your next hero. Every level of the cave contains a boss guarding the exit somewhere in the level, but with a small mini map and a screen that only shows you one square in front of you, you'll soon understand why it's called a maze instead of dungeon. But searching the area (whether by actually exploring or just being lost) you'll find chests containing gold, potions or relics of weapons or armor which then unlock better equipment. As you travel, however, your chances of being attacked by some stereotypical dungeon monsters increases. This is indicated in the corner by an orb that slowly turns red with each movement. Expect to die plenty of times, but each death is another step forward for the generations to come, and soon your little humble village will be a blooming city of heroes. 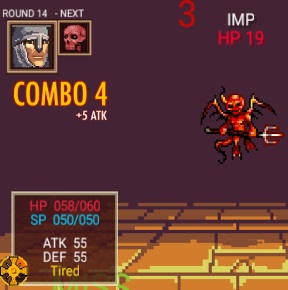 Mazes of Karradash really does play like a game from the good old days. Even how you move has been taken out of the pages of games from the 90's with three buttons... rotate left or right, and move forward, which means it's slow going. Very slow going. You're going to die a few times before you can even unlock your next race or class. This game is all about building up your city, and it makes sense it would start off rather rough. While this fact may make some of you turn around and run (or click to a new article), that's okay because this game is for those gamers who don't mind. The gamers that once had to sit and wait for the game to load the notice to switch the disks, hunt for that almost always missing "Disk 4 of 6" and then wait for the game to load once again. We put up with it because the game experience was worth it. Mazes of Karradash is enjoyable for those who don't mind to grind. They fix some common issues that are usually in other RPGs, such as the defend button that usually just wastes a turn to block damage from the next attack (and therefore usually ignored). But in this game every attack makes you a bit more tired, which give the enemies a better chance of acting again twice, or three times in a row. Defending lets you rest which makes it strategically necessary. It's small changes like these that keep battles from just being button mashing experiences. Not everything is fixed though, as I wish they left in the bosses you've already defeated as a nice way to boost XP, but Mazes of Karradash is a good retro game that is a dive into the pull of reminiscing. For those who love old school RPGs and Dungeons and Dragons, then the small price tag attached to this game is well worth the bounty of old school adventure you'll receive in return.

without having it played, shouldn't the rating be like Yellow or Orange?

Hey MarkR,
What reason do you think it should be? Did I miss or over look something?