Maximus is the sidescrolling beat-em-up iOS device owners have always wanted. Taking pages from brawlers like Golden Axe and Castle Crashers, this humorous take on the genre from Mooff Games does the nearly impossible by making touch screen controls actually work for an action game. Sounds crazy, right? It's not, and after spending some time with Maximus beating things up and gaining a few levels, you'll probably want to hunt up the Mooff Games folks and be all like "Are you a wizard?". 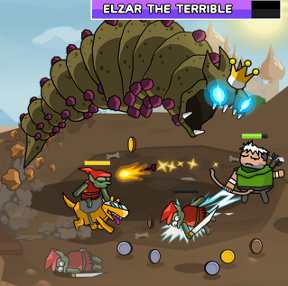 To start out, pick one of the four heroes, each with their own particular fighting style and special moves. You then fight your way through nearly 20 levels of progressively more difficult enemies, ranging from skeletons with swords to sorcerers with magical staff thingies. Use the left side of the screen like an invisible joystick, sliding your thumb to move around the 2.5D landscape. The A and B buttons on the right serve as quick/weak and slow/strong attacks respectively. As you defeat foes you earn coins and experience, the former allowing you to increase your stats and the latter increasing your character's level so you can unlock new abilities.

Maximus is filled with pomp and theater, much to the game's favor. Everything about it is over-the-top and comical, but never at the expense of honest gameplay or challenging fights. Maximus keeps the brawling formula simple enough to work on a touch screen device without gutting it, and there are plenty of fantastic extras to keep you entertained, like rideable bears, boss vs. boss battles, and a survival arena. Whether you're an old school fan or just want to hit things with a board that has a nail in the end, you really can't go wrong with Maximus.