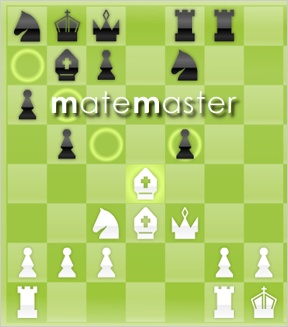 Chess, the definition of a "thinking-man's game." Without it, we wouldn't have games like Risk, Stratego, or even tower defense games. When it comes to predicting your opponent's next move, chess is the master's master.

MateMaster takes chess and moves it a step further into the casual gaming realm by turning the classic board game into strategic puzzles. These puzzles are the same type of mind-benders that still appear in some newspapers next to the word jumble and bridge game brainteasers. They represent what chess players call "endgames."

The idea is simple: produce a checkmate in a given number of moves. Checkmate occurs when you put your opponent in a position where they can not make another move without their king being captured. At the beginning of a puzzle, pieces are set on the board as if you were near the end of a game. Some puzzles will involve only a couple of pieces while more complex ones will often use a larger number.

The puzzles start off relatively easy, with checkmate only one move away. Simply move the right piece into position, and you win. These puzzles will help the uninitiated to get a feel for what the various pieces look like and how they move. When you click on a piece, small circles appear on the board wherever you can place it.

As you graduate to more difficult levels (there are six in total), the number of moves increase, with the "fiendish" level set requiring checkmate in 6 moves. This requires quite a bit of strategy to think through, because you are playing a game against an opponent, who is not going to just sit back and watch you capture their king.

Analysis: As puzzle games go, MateMaster is fairly unusual. While two-player chess games on the Internet are common, this type of riddle is harder to find. The uniqueness helps to offset the rather bare-bones presentation of the game. And with 650 different puzzles, you'll be busy with MateMaster for quite some time.

While the puzzles are challenging enough, the included engine for playing a full game is somewhat lacking. I'm no chess expert, but even I was able to beat the computer by sacrificing a few pieces and chasing down its king. Perhaps the purpose is to initiate beginners, but anyone who is succeeding at the higher puzzle levels will find the computer opponent far too easy.

But MateMaster is about the puzzles, and it delivers in spades… or is that pawns? Bishops? Well, anyway, regardless of your Elo rating, you'll find a challenge that will suit you with MateMaster.

One thing you may want to mention is that, in puzzle mode, it won't let you make a move that will put your own king in check/checkmate. For instance, on level 4

I thought there was a glitch because I couldn't move the right-most queen diagonally or vertically, until I realized that the reason it wouldn't let me was because that would put the king in jeopardy.

"One thing you may want to mention is that, in puzzle mode, it won't let you make a move that will put your own king in check/checkmate. For instance, on level 4"

Why would that need to be mentioned? Putting yourself in check is not a legal chess move any more than moving your bishop along the horizontals.

I played on super easy and it got boring, but it also taught me about looking at the whole board. Good for someone looking to learn a little more about chess and maybe hone skills without having to play a full game. For me though it did get boring after a while and there is no real reward for winning I am sure. Good as a teaching tool.

Am I being dense? What's the answer to Beginner 34? I used to be a pretty good player but I can't see how mate in 2 is going to be possible.

As far as I'm aware, convention is that the solution has to work against any defense, however suicidal. It seems that black can pretty much always play a check with his queen (barring Bf3 or Qf3, which don't help) which is going to screw everything up for at least one move.

Even ignoring this (the computer doesn't seem to take the checkmate opportunity if you move the queen away from the knight, so it's not the smartest) I can't see how I have time to construct a mating net without serious help from black.

Looks great! I'm not a chess fanatic but I have a major problem with looking at the big picture when playing. This should help me out.

Problem 56 in the easiest level is impossible, the answer taken is not valid by the chess rules.

Beginner 34 really doesn't seem to have an answer. It's starting to drive me mad.

I can't even conceive of a solution to aim for. Nothing can back up an attack on g7 in time so it must be a back rank mate. But it can't be, because e8 is defended too many times. I can only assume I'm missing a piece.

Hmm. Whilst it looks nice, I don't think I could recommend it as a teaching tool. Some of the solutions are just plain wrong. Black walks into mate without thinking.

But why on earth does black play 1...fxg6? 1.Qg6 doesn't threaten anything. It's just a feeble trap. Almost any other move by black will keep the game going, 1...hxg5 wins a bishop. If the point of this program is to teach people better chess technique it needs to have an AI that doesn't just grab queens without thinking one move ahead.

Sorry for all the comments. Last one, I promise. But this program has made me a bit annoyed at how slapdash it is.

There are puzzles that have shorter solutions than marked. eg. easy 11

There are many more examples of puzzles where the 'solution' only works because black grabs any pieces it can get its hands on regardless of the consequences. Sacrifices are fun and all but only if they're sound.

And I don't mind the chess playing engine being weak but you can't castle, which is a pretty huge problem if you're trying to learn to play better chess. I feel a chess program ought to at least have all the rules implemented.

Anyway. I'm done moaning. I'll go play something with ninjas in it.

I lied. But I'm only back because I realised my mistake.

The solution to beginner 77 is actually

But that doesn't change the fact that 1. Qg6 'works' when it really shouldn't do.

Beginner 109 seems a better example of a broken one. I can't find a way to do it without help from black.

And Beginner 34 is still a mystery.


Start with Qxe6+ instead.

I don't see an answer for beginner 34, though black has a mate in 2 starting with Re1+. Maybe they swapped colors by accident.

Beginner 34: they goofed up, it is Black that has a checkmate in two. Can you spot it?

the chess engine is too easy to beat

I managed to get the engine to fall for scholar's mate.

"Problem 56 in the easiest level is impossible, the answer taken is not valid by the chess rules."

What's not valid? Nc7 and N5d6 are both winners and perfectly valid. The e-pawn is pinned in place by white's queen.

Note N7d6 doesn't work because the king has a flight square.

The game is a pretty cool work diversion :)

Easy Problem 64 is, I believe, impossible.

I solved easy level 64 with:

One problem is that the game sometimes makes different moves in response to the same positions, and such behavior could render the above solution unworkable at first. But if you try it a few times, it should work...

Provided that the black king moves to b1 and then back to c1. If its first response is to move to d1, or it moves to the a file from b1, try again.

As Richmcd points out above, the solution to a chess problem shouldn't rely on your opponent making stupid moves. Real world play is a different matter. %?)

I can't manage to get past Beginner 28. Any hints?

For anyone that actually plays chess, this flash game is downright annoying. The puzzles are incredibly fictitious and repetitive.

Great idea, but it needs some more polish and QA. (Stronger AI would be good to.)

Is beginner 41 broken? I capture the king instead of setting up the little trap it wants, and it just continues to play and tells me I've failed.

Anybody know how to beat Beginner 5? I've tried every thing and I can't beat it.

Any thoughts on Beginner 83?

You have to sacrifice a piece.

To Kojiro the solution to 56 - Novice:

The link appears to be broken

@JIGuest (and richmcd): I was able to castle -- but in all the other computer chess games I've seen, castling is done by moving the king two spaces toward the rook (and then the computer moves the rook for you). This one, for some reason, wants you to move the king onto the rook, and then it'll put both pieces on the right squares.

Yes, the AI is too easy to beat. In fact, it doesn't even seem to follow the book openings. It responded to my opening move 1. e4 with 1. ...g5 -- and while I don't know all the book openings, I know that opening moves usually try to gain control of the center, which this move doesn't. I don't feel I played very well, but I still managed to end the game with a bishop, a rook, and three queens against Black's lone king.

@Joel: I've heard of study puzzles (where the initial board position is unlikely to occur in a real game), and I've seen positions that would have involved a lot of underpromotions (e.g., one where Black has six or eight bishops), but I think this is the first time I've seen a position that couldn't possibly occur in a game: Novice 10, where White has 21 pieces. (There may be other such positions -- I only looked at the first 14 novice puzzles, and the first and fourteenth of the other difficulties.)

Finally, having a longer solution doesn't necessarily make a puzzle more difficult. I've seen a mate-in-six study that was trivial to solve -- there was only one legal move at each step!

Could use a better opponent AI, for example many of the 3 move mates I could do in 2 because the AI was foolish. Can you re-purpose some open source chess AI that can look at least 6 moves ahead?