Margrave: The Curse
of the Severed Heart

Her parents spent their time searching for an artifact called the Severed Heart. Now, Edwina Margrave is driving through the dark woods to a remote village where her mother and father were last seen. Probably not the brightest idea she's ever had, but Ed knows a thing or two about the supernatural realm. The hidden object adventure Margrave: The Curse of the Severed Heart opens up with our heroine arriving at a dimly-lit cottage in the woods. She is seeking answers, but naturally she'll find many more questions as things begin to unravel in a most peculiar way. Ghostly animals haunting the realm of the living, anyone? 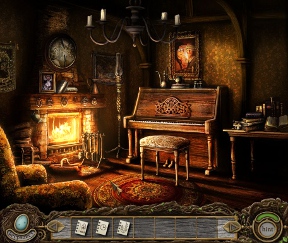 Margrave: The Curse of the Severed Heart begins predictably enough, but as soon as you get a taste of the gameplay, you'll realize how deliciously perfect the game really is. Just like most casual hidden object games, the mouse and your cursor will guide you through just about everything, changing shape to point you to areas you can explore further, items you can pick up, or directions in which you can travel. In addition, Margrave features a neat twofold inventory system that includes key items as well as keepsakes, small objects you find or sketches that Edwina takes down of things that could be important later on.

No hidden object game would be complete without hidden object scenes, and while Margrave doesn't focus on them very heavily, you'll find more than your fair share of laundry lists to complete. Items are extremely well-hidden in this game, blending in with the background so you have to stare at every other pixel to find many of them. The hint button becomes your best friend very quickly! 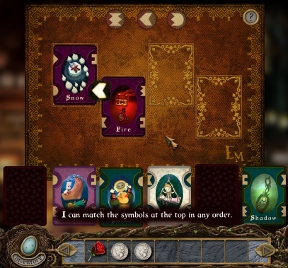 Analysis: Margrave: The Curse of the Severed Heart is all about the story and setting, and it paints such a wonderful picture with both that the gameplay comes in second. In fact, sometimes the actual "game" parts of Margrave seem like an intrusion, as all you really want to do is explore the surroundings, make sketches about unusual symbols or items you've seen, and discover new things about the occult world just beneath the surface. Margrave has depth, layers of intrigue piled on top of each other. It's like watching an episode of Lost, sans polar bears.

Another high point in the Margrave experience is the Dream Card mini-game. Each time Edwina encounters animal spirits, she uses these cards to divine the animals' former names. To use them, you must place four cards on the screen so that the shapes on the sides form the figures shown at the top of the screen. It's a unique sort of diversion that's different from the usual mini-game fare. And it's steeped in tarot artwork and mythology, so naturally you'll feel a bit like a psychic yourself each time you name a spirit.

With fantastic locations to explore, a great storyline to follow, and an interface design that never gets in your way, Margrave: The Curse of the Severed Heart is the kind of hidden object game everyone wants to play. If you were to line everything up that makes a good hidden object game, tag it and rank it in order of importance, Margrave would mirror that list almost perfectly. It really is designed that well, almost as if the people who made it actually play casual games themselves!

A Collector's Edition is also available. It contains a bonus chapter to play along with an in-game strategy guide. Remember that Big Fish Game Club Members pay only $13.99 for Collector's Editions (or 2 club credits), and collector's editions count 3 card punches of 6 total needed for a free game.

A word of advice: Don't play this game at night.

Does this game somehow connect to the Margrave Manor series of games? I have downloaded both of those, and would be more likely to get this one two if it continues (or at least draws upon) the story from that game... :)

I'll probably still download it anyway, but I am curious about the possible connection.

Mary: Indeed the two are connected! The stories are different, but Edwina is the star of both. Some actually refer to this game as Margrave 3.

Really loved this game - the puzzles with the matching tiles were different, and the voice acting was great. The visuals were superb as well, highly recommended game :D

Why has no one mentioned the lovely song at the beginning of the game? I am not a fan of game credits but I was thoroughly miffed that the one time I actually wanted to see them, they were missing, not even available in the options menu...

So ... has anyone else had the problem of not being able to use the slingshot and/or not being able to click on the dream card shapes in the animal yard? I can't continue because of this. I had to skip the duck/bird water puzzle because I couldn't get the slingshot to work. It took me 20 minutes to get the 3rd target in the sweetshop. I still haven't been able to shoot the target in the barn, nor click the shapes in the animal yard. I'm at a loss. No guide gives any clues or any hint that anyone else has had trouble. I even restarted the game on a new profile and it still didn't work.

Am I missing something? Or is this really bugged?

This is what a point-and-click Adventure/HOG should be. Original, mysterious, absorbing, beautiful ... this is worth every penny.

Answer to Dana's question: With the slingshot, sometimes you have to hit outside of the target. Target in the barn: position slingshot so that the right side barely touches the top left of the jar. It should break open. (Took me a long time to figure that out.) With the slingshot you have to aim it in exact spot, otherwise it won't work. But, I still have problems with the shapes in the animal yard. I got two, but I click on the others and nothing happens. HELP!

I have the same problem with the slingshot and the shapes in the yard. I have tried suggestions made on here but its still not working.

Psst, BadCzech, the song is This Town by Helen Lawson.