Anyone who has worked in hospitality or seen a certain Wes Anderson film knows that being a lobby boy just isn't easy. The hotel has to be kept in tip top shape, the guests are always in need of a room service delivery, and foreign government agents are smuggling secrets across the border! All in a day's work for our petite protagonist. It's your first shift at the extravagant Maquisard Hotel and you hardly have time to get acquainted with your duties before a masked revolutionary tunnels through your bedroom floor and tasks you with identifying a government agent hiding among the hotel's five valued guests. The catch? You have only three days to catch the spy, so act quickly!

Your informant gives you a series of descriptive characteristics to help you identify your target. Most guests share some of these traits, but only the agent has all five. Some traits are easier to identify than others. Clumsiness, for example, can be tested for by observing whether a guest knocks a vase over as he or she walks by a table in the hallway. Others, like whether or not a guest is romantic, can be a little trickier.

Luckily, our lobby boy has a few stealthy tricks up his sleeve. Sneak around behind flowerpots to eavesdrop on conversations, listen at guests' doors, or simply have a word with your fellow staff members to pick up details about the patrons' personalities, all by pressing [SPACE]. You can also carry items around to see how guests react to them. Keep track of all these tidbits in your trusty notebook [TAB] and in no time, you'll have the mystery solved! 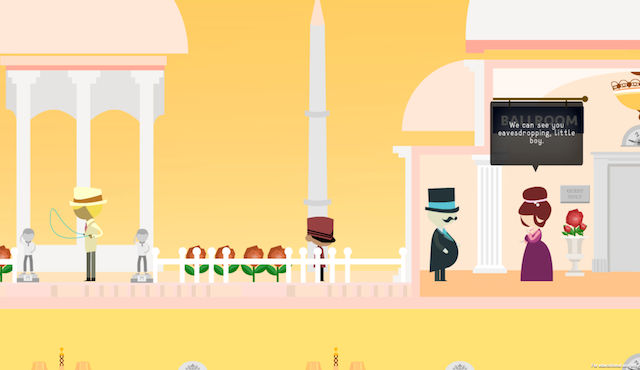 The gameplay isn't terribly hard, but the guests move around often and it can be difficult to keep track of them with your limited field of view. Several times I found myself laughing slyly aloud as I trailed a guest, only to have them lose me in the elevator (which lowly lobby boys are forbidden from using) and disappear into their room. You quickly grow to appreciate how speedily the lobby boy can go up and down stairs! My only real criticism of the game is that there's no way to fast forward through time. On one playthrough I had the identity of the agent figured out by the end of Day 2 but had to wander around the hotel for the entirety of the third day before I could make my accusal.

The pastel colors and the simple but appealing art style makes for a delightful little casual gaming experience good for a few low-octane playthroughs. Maquisard isn't a new game but it's one you easily might have missed. It was featured as an Official Selection at E3's Indiecade Showcase in 2015 (the same exhibition to feature Infinite Fall's Night in the Woods) and is available for free download on itch.io for Windows and Mac. Take a few minutes out of your day to check in to the Maquisard and do a little snooping! It's your patriotic duty after all.