The thing about inspiration is that it sort of sucks. You could be halfway through your adventure fanfic mashup of Harry Potter and Spongebob and bam! your inspiration leaves you staring helplessly at the screen in the middle of the Krabby-Patty-cook-off-on-broomsticks scene. This is pretty much what happened to Scarlett (minus the fanfic). She is the protagonist of Manor Memoirs, Playrix's new hidden-object/time-management hybrid – a bestselling author who just can't get herself to start working on her next book. So she takes the only surefire cure for writer's block: she buys a sinfully expensive mansion in the country and moves in. Having neglected to visit the place before buying, Scarlett realises the manor is almost in ruins and in dire need of renovating. This is where you come in. You are an expert interior designer and the perfect person to conduct a series of garage sales to raise the money for the makeover. 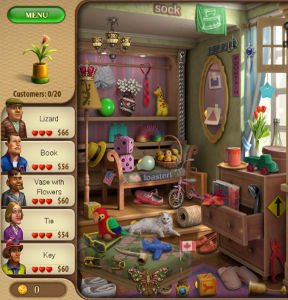 At its heart, Manor Memoirs is about hidden-object scenes. You will help Scarlett sell junk out of various rooms around the house. People will appear on the left with the items they want to buy, and you have to locate them in the general clutter. Some customers will want a few of the same item, or give you cryptic descriptions to try to trip you up. But you've got a trick or two of your own: each level hides a few objects which can help you (for instance, a compass will point to the required items). By the time you finish the game, you will have held around seventy sales, which is quite an impressive number. The good news is that new rooms keep popping up pretty late on and items get shuffled around, so the levels don't feel nearly as repetitive as they could have done. Still, don't expect Manor Memoirs to be demanding. This is the quintessential casual game, made to play when you simply want to relax and have a thoroughly cozy, pleasant time. If you want more challenge, there's always the timed mode, where customers gradually lose their patience if you don't serve them promptly. 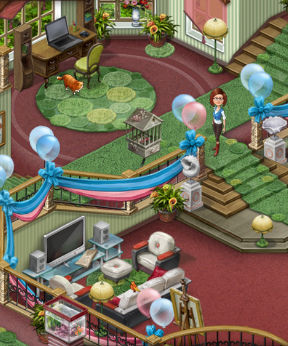 Arguably the most entertaining part of the game is renovating the manor. You will get the chance to fix it up just the way you like it, from new carpets to the aquarium, and then stand back and marvel at your design prowess. Manor Memoirs looks a lot like Gardenscapes: Mansion Makeover, and even shares some buyable items with it. This time you get a cat instead of a dog (suggested names: Bouncy, Fluffster, Garfield's Lazy Twin), but the overall feeling is certainly the same. The manor is as warm as lovely as you like, and Scarlett will always greet you with her sunny disposition and a new project she needs help with. If all you want from the game is a getaway into a charming little world, you've got it, but it has to be said that Manor Memoirs lacks a bit of innovation. There are a few new features here and there, but it's nothing remotely groundbreaking. Sure, it's risky to tamper with such a successful and beloved formula, but it would certainly be great to see some real changes in the next installment. Until then, make sure you try Manor Memoirs – it is guaranteed to make you all warm and fuzzy inside, even if you're not exactly a fan of the genre.

Manor Memoirs Collector's Edition: This is a fun game, but Scarlett doesn't talk very much. The Pro Design achievement is very hard to complete, no matter how many times you change the room around. Still waiting to complete the dark room achievement also. There is no help or walkthrough for this game yet.