"Battle not with monsters, lest ye become a monster, which is actually a pretty sweet deal, tell you what." Nietzsche said that, friends, and I don't think there's any doubt he was talking about Xform's insane action game Man or Monster, which, as the title implies, allows you to play either gun-and-jetpack toting fleshy (blocky!) human, or giant, snarling, crushing (equally blocky!) monster. Depending on what you choose, you're either trying to save or destroy a variety of cities around the world. If you're playing as human, you move with [WASD] or the [arrow] keys, aim and shoot with the mouse, and right-click to activate your jetpack and fly around. Humans can also build defenses that will automatically fire on the monster when it's nearby, but these have to be purchased between levels with the money you earn for both them and upgrades to your equipment. The monster's health will be on the right, your health is represented by the hearts in the lower right corner, while the city's health bar is on the left, and it's your job to destroy the monster before it destroys the city. If you successfully fell the behemoth, you'll be rewarded with more sweet cash. But what if you want to get in touch with your animal side, you ask? 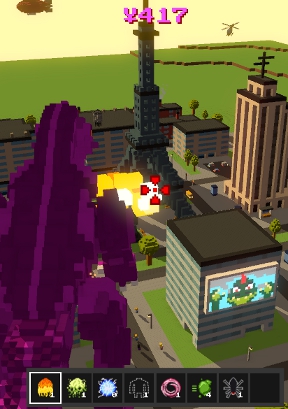 Each monster controls roughly the same way, with [WASD] or the [arrow] keys to move, and the mouse to look around or use the default attack. Right-click is your secondary attack, while the [spacebar] is your special attack... you'll usually have several of these available to cycle through, and you can buy more with the loot you earn demolishing cities between levels. Your goal is to destroy the city before the army destroys you, and as you rampage, you can even target civilians to gobble them down for a quick health boost. Each level you play as a monster, you can choose which monster you want to use, and each one has different abilities and customization options. While playing as a big beastie is intensely satisfying from a rampaging point of view, unless you're playing from the first-person perspective (enabled under options), it's often frustrating to try to aim at the itty-bitty attackers scurrying about your feet, or even aim at all. Similarly, playing as a human can mean staring at a lot of walls while you struggle to navigate and get your bearings, and both play modes feel like they would have benefited greatly from a simple radar minimap to help find your way around. Likewise, movement for monsters feels a little clunky, though I guess when you're the size of a small skyscraper, you're probably not that light on your feet.

Despite these annoyances, however, there's a lot to be said for the way Man or Monster indulges in its cartoonish mayhem on such a massive scale. Difficulty is a little slow in coming, to the point where it seems like the game is almost entirely about the over-the-top sandbox destruction, and swatting helicopters out of the air while eating civilians at the Eiffel Tower is ghoulishly delightful. The monster rarely feels like much of a threat to you personally while playing as a human since it tends to focus mainly on crushing buildings in a strangely methodical fashion, but you'll quickly have to get in and get dirty if you want to take it down before it trashes the whole city in later levels, and there's something thrilling about jet-packing around a gargantuan werewolf body-slamming an office building. Man or Monster isn't quite as fluid to play as you might hope, but it's a fantastically colourful and riotously action-packed experience that's good for as much or as little grand-scale destruction as you feel like.

*sings* Am I a very monstrous man, or a very manly monster?