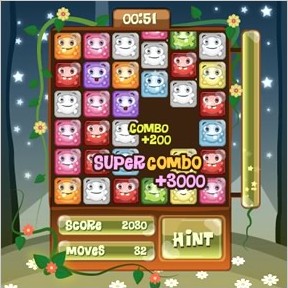 Back in December I reviewed a game called Manole that was developed in Romania and hosted on a Romanian games site, ejocuri.ro. Florin wrote me to say that their site had received such a positive response that they decided to translate the site to English. The result is the recent launch of Gamesheep. It was there that I found this delightful action puzzler.

Makos is a game that is somewhat similar to so many other games in the very crowded genre of tile-matching puzzle games, and yet it managed to grab my attention with its adorable little forest creatures and addictive gameplay.

The game is played only slightly different than others like it: use the mouse to slide a row or a column to group three (3) or more makos together. Any grouping of 3 will do. Fill up the bar with stars to the right of the play field to move on to the next level. Press [S] to mute all game sound; press [P] to pause the game. [Edit: and now you may press [M] to toggle on/off the music. Nice job, Florin!]

The graphics and sound effects are all nicely polished and give the game an attractive charm that will likely have you coming back to play often. The only thing I would change would be the terribly short and repetitive music loop that gets annoying very quickly. I wish every Flash game developer would put the music tracks on a separate control from the sound effects so that the music can be turned off independently. Click.

Since 2001, Florin and his team of game developers at FlashTech Network have created over 250 games for many different websites, and they are now concentrating development efforts on their own site. Eventually he hopes to have the site completely filled with their own work, and I wish them much luck and success with it. I will certainly be keeping an eye out for new games they create as the work I've seen them produce so far is polished and quite impressive.

Update: Thanks to everyone who wrote in to say that Makos is very similar to PopCap's Chuzzle. I have never played Chuzzle since PopCap's games don't run on my Mac. =/

It is very similar to Chuzzle by PopCap. It is really well done and looks good and plays smoothly, but I cant forget Chuzzle when I play this one. Even the cute furry creatures are same.

Its pretty cool... reminds me a bit much of bejewled but the friggen pieces blink way too much, which gets distracting when you're looking for a match and the pieces you need are locked in place

I knew I had played this somewhere before, although I enjoyed chuzzle's gameplay a little more, I like the lack of intrusive ads and not having to agree to an ActiveX.

Hi Jay Love your site, but do you have any plans to do some sort of list based on genres so it is easier to find the games you like?

Thanks, Kannan. Yes, categories and a tagging facility are both in development. I will have more time to complete them once this term at RIT is finished (currently week 9 of the 10-week winter quarter).

I realize it is a feature that is sorely needed here, and is highest on my priority list with respect to the site. cheers!

Makos is not a clone of Chuzzle. Anyway, it's true that it uses the same idea (sliding lines and columns). Actually we had this ideea long befone PopCap; we just did not make the game :) It's useless to say now that we were the first to have this idea.

As you also mentioned, there are hundreds of games and variations with sliding/switching tiles. Makos has a different blocking system and a different level system (different from Chuzzle). You make a nice game and all people (and I'm not talking about you here; really) have to say is: "Hey! I've seen this game somewhere! It's a clone!". CMON!! You will not find a single graphic element similar to Chuzzle.

I just wanted you to know because I don't want you to get the wrong idea.

I really enjoy this game, and it is very well implemented (aside from Jay's sound options misgivings); and it indeed seems like an original game to me. BUT (my own problem!) I'm so used to the controls of Bejeweled that I just can't get the moves right. I keep wasting time by trying to swap the place of adjacent makos! ;P

I've personally never played a game quite like this one, and I think it's the interface (which is incredibly smooth and well done) that distinguishes it from most games from its genre. I did notice one small bug, though: on my computer, when I turn off the sound by pressing 's' on my keyboard, the sound effects remain muted while the music starts up again at the beginning of each level.

Otherwise, great addition to the site. Thanks, Jay.

Hey, Florin, its sad to hear you had the idea before Chuzzle was released, but creating it took long enough time so PopCap got first. If I had not played Chuzzle (and Gemshop) before, I would say this is great idea and, like I said, Makos is still very good game and done professionally and its enjoyable to play.

Its very hard to come up with original idea for the game, usually similar game has been already made. Maybe long time ago and maybe its not widely known. Its very depressing to visit sites which review old DOS games, its amazing how many different games have been made. But luckily, most of old DOS games are really bad so even if you use somewhat similar idea you can probably make much better game.

I could for example get idea of ball moving around the stage and blocks getting destroyed when hit by the ball and user controlling block in the lower area to avoid ball going out. I am sure most people would say it is BreakOut clone. Yet, BreakQuest used exactly same idea, but with such a style that it reached whole new level of gaming experience. Without any doubt the idea is not original and nobody really cares because the game is so good.

The noises they make are both adorable and slightly disturbing!

Great game - I like it better than Chuzzle, actually.

My only complaint is that I can't really "read" the star meter; it's too diffuse. I can't tell if I have a lot left or just a few left, so the game ending (or me passing the level) is always a bit of a surprise.

I love Chuzzle. Its a super fuzzy fun puzzle. The little fur balls are adorable! :)

i didnt think that makos was very cute
but thats just my own opinion i guess .. and everyone has their own :)

Fantastic game. Its more than just the gameplay, its the overall look/feel and charm. I love it! Great site too, just stumbled upon it and i think i may be here a while.

"We fixed the sound bug and added a "Music On/Off" button (M) in Makos."

The graphics and controls on Makos were buggy when I tried it. Dragging the lines or columns sometimes do not respond at all, it sometimes locks up. It is not a performance issue because my computer is quite high-end. I had twice the occurence where the color displayed was not the correct one. And it switched later to the correct one. These bugs made the game a lot frustrating to play.

The game itself is very similar to Chuzzle. With the difference that Chuzzle does come with a lot more gameplay features. Among other features the full version of Chuzzle has some easy and some difficult-to-achieve awards which makes it replayable.

Buggy? Or user error? It's hard to tell sometimes.

I do know that if you begin to drag in a vertical direction, then the horizontal direction for that tile becomes locked. Could that be what you mean, Spike?

Maybe the control interface of a game such as this should allow for some play in either direction before committing to one or the other. I imagine the problem stems from a tile's row or column being movable and the Actionscript code that has to support it.

The only thing frustrating for me with this game is when I know the clock is nearly at zero and I can't find a match(!). =)

I have also experienced a tile's color changing inexplicably a couple of times. I can't pinpoint the exact behavior that causes it, but I think it happened when I was moving tiles in one direction and then decided that I wanted to move them in another direction. At that point, I noticed that one of the tiles I was trying to match with the others had swapped colors with another one at a different place on the board.

You're not crazy, Spike. Or we both are.

I laugh every time they scream

Does anyone have any hints to do better at the game?