Often I will get a thought provoking comment or email from someone that would make for an interesting topic of discussion here, and therefore deserves to have an entry created for it.

"Here's something a little off topic, I was wondering if you (or anyone else) has heard of the game for Nintendo DS called Meteos (it's by the same people who made Lumines for PSP). It's a very good and original looking puzzle game. It's coming out in the US in April I think." -Harukio 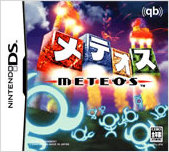 Yes, I have heard of the game, in fact I had just read a preview of it over at IGN by Craig Harris who played the Japanese import version. The puzzle game has a Tetris-like quality in that blocks fall into a bin, and yet it offers a richer gameplay experience. Players aim to match 3, 4 or 5 blocks horizontally or vertically by dragging blocks vertically within a column. Matched tiles then turn into rockets that launch any blocks above them upwards. Boost power can be increased by forming combos, and with enough boost launched tiles can lift off the screen and out of play.

The designer of Meteos is Masahiro Sakurai, the creator of Nintendo's Kirby and Super Smash Bros, and Craig says the SSB influence is visible in the game. Replay value is enhanced by a reward system in which every block launched into space accumulates, and then can be used for purchasing extras included in the game. It all sounds very cool.

For anyone interested in learning more about the game, check out the following:

Has anyone heard anything else about the game? Are you looking forward to it? What are your impressions? Sound-off about it in the comments.

The offical website also has some nice game footage and other useful things.
http://planetmeteos.com
Although it's all in japanese.
(Thank goodness for google translation ^_^)

And I must say, I really like your site, I check it just about every day.

It does look really cool, and has a (finally) unique concept!

This looks like a game that came out for the PSP, and was supposed to be really good. Called Lumines. Go to www.gamespot.com and search it. Also, Gamespot has these neat VIDEO REVIEWs!

Meteos gameplay is actually nothing like Lumines, though they are made by the same company, Q Entertainment. You can play a Java-based version of Lumines here.