Magnetized, by Rocky Hong, is a simple one-button HTML5 physics arcade game of pushing and pulling. The goal, as it is, is to guide the moving square blip safely off the screen, without hitting any walls. However, you may not directly affect the movement of the blip. Instead, there are magnet towers scattered across each screen. By holding [Z] or the mouse button, the towers will magnetize, affecting its velocity by attracting the blip towards the tower. The blip will maintain its inertia, so you'll often be sling-shotting it Apollo 13 style. There are three sets of 20 colored levels to unlock, each with slightly different physics that will combine in interesting way, eventually leading up to a final battle. 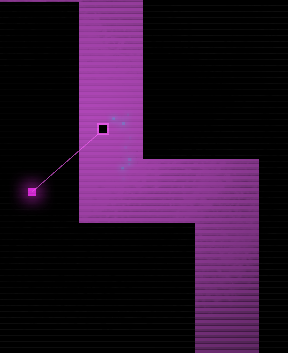 The mechanics of Magnetized are intuitive and easy to grasp. Make no mistake, though, just when you've gotten the hang of them is the exact moment that the game starts pulling no punches with its challenges. Practice makes perfect, however, and while those who complete Magnetized will probably do so with a death count of at least three digits, there's something undeniably satisfying about juuuuust avoiding a wall, as you execute a perfect loop that puts to right on the path to victory. The ethereally abstract presentation and chiptune soundtrack to a lot to set the mood right, and while some may find Magnetized's emphasis on precision annoying, just as many will find themselves strangely drawn to this little square's strangeness and charm

This game doesn't load for me.

Very entertaining! VERY challenging as well. I'm stuck at 57 right now, I know how to do it but it's tricky.

It's an HTML5 game. I have no idea what browser you're trying to use (please specify next time, that will help us understand where the problem might be), but you might want to try a different browser if you're using IE.

Gave up on 55. I can see how to do it but it requires more perfection than I can muster up.

I found an easy tricksy way to do 55.

Okay, how are you supposed to beat 57? That zigzag of sliding walls near the end seems like you have to be impossibly precise to get enough room to jump forwards. If you're off by just a little bit, then you get stuck jumping up and down in the same spot and you're guaranteed to blink away from one wall and into another. Am I missing something?

omg too fracking frustrating of a game

I love how the game mechanics get more fleshed-out over time without a ton of explanation, it's a really natural development. Probably too tough for me to finish completely, but fun.

And unlike the last HTML5 game I tried, it's working great with Firefox! Excellent.

For the first part, just jump twice immediately and save time. For the second part, you don't enter the spiraling squares, but rather jump diagonally between them.

The last part is hardest, but you can beat it by holding, the unclicking and rapidly doing a full click. (Repeat whenever you're about to run into a wall.) It's a bit hard to do it, but you end up pausing, then jumping away and back to the original spot. That way you move through the whole corridor in one slot rather than zigzagging forward.

I liked the game in the end, but the blue magnets were a bit hard to work with. Also, the sound kept cutting out.

Does anyone else find it astonishing that people still make games that don't allow you to separate music and fx? I can't abide constant music. But fx make a significant contribution to enjoyment of the game. I know nothing about game-making but it must be utterly simple to give players independent control over each. It's just baffling to me how game designers don't realize that they should do this. Am I alone in feeling this way?

Holy cow, that was nasty. Sunk an hour into the last level alone, but that feeling of success was so worth it :) Oddly enough, the first half of the last level is all about skill and timing, but the second half was really just a brain puzzle. Once I figured out the Secret, it worked like a charm :D

1,954 Views
0 Comments
chrpa— Jayisgames needs your help to continue providing quality content. Click for details Welcome to the Roundup 50 with three games! As mentioned in the previous roundups, only odd-numbered episodes are featured since even-numbered are for Robin Vencel's patrons. More...  ...