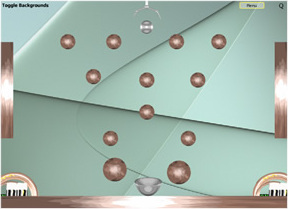 An unusual Flash game with a variety of gameplay possibilities, Magnetism lets you select the type of game that is right for you. Created by Tyler Glaiel, a 14 year-old budding game developer, Magnetism is a unique puzzle game that features challenges of strategy and skill with an emphasis on physics.

When starting the game, you will at first be presented with a choice: do you want to play a game of turn-based strategy, or one of real-time control? Turn-based strategy involves positioning a metal ball to land in a cup when dropped; while real-time control makes use of the keyboard arrow keys to maneuver a metal ball into a cup in real-time—similar to John Cooney's Ball Revamped games. Both modes then allow you to choose a difficulty level: hard ("steep learning curve") or easy ("slow learning curve").

Progress is saved via the Flash local shared object, allowing you to resume playing where you left off at any time.

Analysis: Tyler makes heavy use of magetism in the game and the underlying physics simulation has been implemented well. It was fun to see the metal ball bouncing around the invisible 'magnetic fields' in the game. The graphics aren't exceptional, and yet there is a means by which the backdrop can be changed if desired. Although the sound effects add to the enjoyment of the game, the background music loop is the same for all game modes and becomes repetitive after just a few short levels. There is no way to turn off the music.

With each difficulty level of each mode containing 25 levels, there are a total of 100 levels contained in the game. The decision to offer two very different modes of play broadens the game's potential appeal as well as increases replay value.

On the downside, although there were several levels that I found enjoyable, many of them consisted of extreme magnetic attractions that reduced the "thinking" strategy game to one of luck. Some of the levels in the real-time "skill" mode were nearly impossible for me to complete, and therefore were not as well done as the Ball Revamped games mentioned earlier.

All told, I will be looking forward to seeing what comes next from this promising young game developer as he refines his skills in game design.

With thanks to Ron for the link. =)

Love the blog...many games to keep me distracted from studying =) I found it while trying to get an image from that "Tobby" game off Google.

This is one of the best games you have posted in a while. Very simple and addictive but NEVER monotonous. A+

Wow, another site that posted my game.. Thanks, I'll post a link here in my forum. That was a nice article.

Gah! Gets really friggin hard! AND NO SHOOTING!

can someone please post a spoiler for this? please?

or slow learning curve, i'm not sure if it's easier

can someone help me i'm on the one where the text at the beginning of the level says aaaaaaggggggggggghhhhhhhhhhh!!!!!!!!! SQUEEZED!

Pretty fun, but it's impossible!