Magicka: Wizards of the Square Tablet

Magicka is back! And it's mobile! And Vlad's still not a vampire! Bringing with it everything that made the original game a hit, Magicka: Wizards of the Square Tablet takes a slightly more action-oriented approach to the spell slinging arcade game. You still combine elements to cast various bits of magic that can harm enemies, yourself, and your teammates, but thanks to shorter levels and a new camera angle, it's now all about speed and strategy. 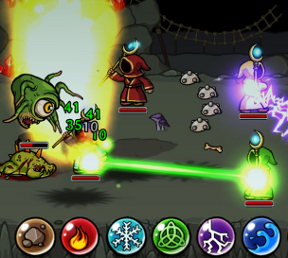 Lining the bottom of the screen are seven icons, each representing a basic element such as fire, water, or earth. Tap these icons to start mixing magic, forming spells you can then unleash by tapping a target on the screen. The elements have real reactions with the environment, so if a sopping wet foe walks up to you, a nice blast of lightning will deal extra damage. You can also combine elements to make magical barriers, shields, walls, or healing spells, which comes in handy when every enemy in the universe is attacking you at the same time.

Magicka: Wizards of the Square Tablet is laid out in a different manner than the original Magicka, but the core experience of comedy, spell casting and wizardey stuff remains the same. In addition to a solo mode, online co-op is also possible, allowing up to four players to do the "oops didn't mean to shoot you yes I did bahhahaha" dance no matter which mobile device they own. There's also an armory where you can purchase items using coins earned through in-game hijinks or by dipping into microtransactions. Nothing obtrusive, just some extras to give you an edge when you're in the mood.

Magicka: Wizards of the Square Tablet is Magicka made new. An attractive price, hilarious writing and voice acting, and a fantastic game that's loads of fun in multiplayer mode.