Magick is a creative mixture of a puzzle game and a platform game designed by developer Ludonkey. Once upon a time in a place really far away there was a young sorcerer named Oz. A stranger knocked on his door one night to break the news that the evil queen had declared magic illegal. Not good news for a sorcerer, as you can imagine. Oz was tossed into a dungeon filled with snakes and lava and flying fireballs eager to turn him into toast. Leaving him for dead was a very super villain-type thing to do, but like most heroes, Oz didn't just give up and take a nap. Instead, he started making boxes to build a path to the surface! 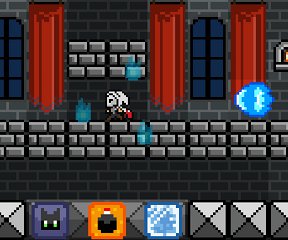 Magick controls with simple screen taps, no jump buttons or virtual d-pads to mess around with. Oz walks and jumps automatically, pausing when you tap and hold the screen and reversing direction when you tough him directly. Your job is to place crates one at a time to form a safe path for Oz to tread. Crates don't do well when they come in contact with fiery things like candles or lava, so in addition to finding the right spot for a crate, you also have to place it at just the right time. Later on you'll unlock a few extra abilities to use, things like a kitty transformation spell and bombs!

Oz has five health points that allow you to fall too far or smack into spikes a few times before having to restart the stage. Dying costs a life, and since Oz only has a few of those and losing them all means losing some game progress, you have to be careful. Levels feature a painfully brief timer that forces you to keep moving even when you have no idea what's going on. When the clock strikes zero a ghost appears and gives chase, taking Oz's health down to one if he makes contact. The word "frantic" comes to mind! 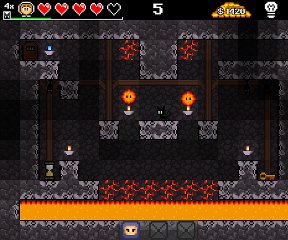 Analysis: Simplicity and smart level design are Magick's two biggest selling points. The game does a lot with little, divvying 60 levels between five chapters with unlockable items and boss battles in-between. The end of chapter battles are actually quite breathtaking on their own, as they ditch the timer and crank up the puzzle elements to make you do some serious thinking. Wouldn't mind seeing a whole lot more of those levels in the future. Hint hint!

The in-game currency system warrants a mention. There are no in-app purchases or ads, but you do earn coins for beating levels, nabbing a few extra if you have time left on the clock. Coins can be spent in the shop for heart refills and extra lives, which somewhat mediates the "oh crud I'm about to die again" feeling of dread. Later on you can also buy checkpoints that ensure you don't lose progress if you do run out of lives.

Magick puts a lot of pressure on you to win. The time limit doesn't allow for standing and taking in the scenery, you just have to go and hope things work out all right. The hearts/lives mechanic magnifies every little mistake, and when the ghost shows up, you'll really start to panic. It almost feels like there's a little too much urgency in the game. Sometimes you just want to slow down and experience the puzzles, as the level design really is top-notch. But alas, you've got eight seconds to make it from point A to point B, and you probably won't do it on the first try. Get ready to cough up some coins at the shop!

Magick is a difficult game and it walks a fine line between being accessible and being unforgivably challenging. It never really trips over its own ambitions, though, providing a lot of fast action and decent puzzles from start to finish.