Even wizards have bills to pay. What, you think that security deposit for cleaning ground eye of newt out of the carpets is a joke? In Tasty Stewdios' colourful and chaotic indie dungeon-crawling action-packed platforming shooter Magic Maker, your destiny could have been literally anything, but the Wizarding Temp Agency insists you're meant to be a security guard. What's that, you say? Not fun? Not interesting? Not challenging? Oh, my sweet little poppet, how wrong you are. Because in the world of Magic Maker, there's a whole lot of danger, and in addition to being light on your feet to dodge enemies and attacks, you also need to craft your spells and equipment from the ground up. Take a low grade electric crafting component, for example, and attach it to your wand so it'll arc from one enemy to another, or slap it on ye olde magic robe and you'll build up an electric charge as you walk that deflects harmful projectiles. Not enough? Find some rock alchemical ingredients and apply it to your wand along with a fire crystal, and sudden you have fireballs that can pass through walls. Or sprinkle a little explosive powder in your ice spell, compound it with quicksilver, and you'll have a rock of ice that travels at breakneck speeds and explodes on contact. With over two million combinations of spells and effects to uncover, you'll need to be crafty and clever to create an arsenal that'll get you past any challenge in the randomly generated dungeons. Stir in a sense of humour and a vibrant, eye-catching style, and you have a brew guaranteed to satisfy even the most sour-faced potions master. 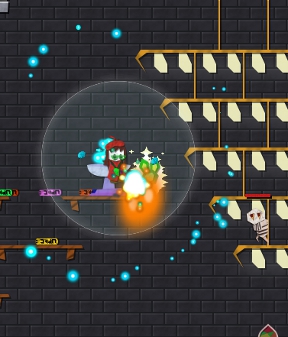 Control is pretty simple, with [WASD] to move, [spacebar] to jump, and the mouse to aim and fire with your wand and spells being tied to the left and right mouse buttons, respectively. (Don't worry, you can rebind keys under the options.) Your health, naturally, is the red bar while your mana is the blue, and while your mana regenerates, your health does not, so it's in your best interest to avoid direct contact with enemies or anything else harmful. As you dungeon-delve on assignment, you'll find various crafting components in varying grades, with F being the weakest, and all of them have their own unique effects and can be combined with one another however you wish. Back at the academy you're guarding, you can customise how you and your spells look, and also visit the alchemy lab to try to craft new components out of the essences and stones you've already found by combining them, Doodle God style. 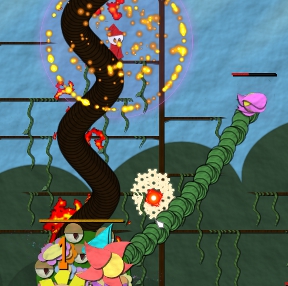 Contrary to your job title, you won't be kicking back at a desk with a flashlight and some Krispy Kremes watching Supernatural re-runs on the night shift. The academy has portals to different zones, and each one is filled with missions you'll need to undertake. There are four gems you can find in every level, each one of which unlocks an extra treasure chest, and usually one very big, very mean, boss monster presented Legend of Zelda: Ocarina of Time-style. Each zone will have multiple missions for you to play, and they get harder as you go along, upping level complexity and enemy power. All of which sorts of makes one wonder if the people who hired you know what a security guard actually does. Regardless, it's pretty clear something is afoot in the academy, and it may have something to do with a former student who left recently under, ehhhh, hostile circumstances. And the good(?) news is that since everyone else at the academy seems to spend all their time sitting around making snarky comments about your wardrobe and competency, it's up to you to stop whatever evil-ness is going on. 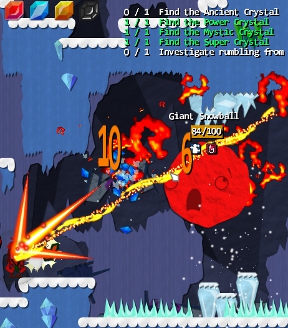 Analysis: Magic Maker is one of those games that elevates "chaotic" to a new tier. At any given movement, there are typically projectiles flying all over the place from you and your many, many enemies, and with all sorts of sparkles and smoke and explosions going off, it can be hard to tell what's going on. While most enemies are largely only dangerous because they tend to show up en masse, some have annoying status effects like fear, and bosses have thousands of hitpoints and all sorts of special attacks that will have you scrambling and leaping all over the screen to avoid them. These boss fights are by far the most entertaining part of the game and effortlessly capture the gleeful, off-the-wall feel of classic console platforming games. Depending on which zone you're in, the difficulty and complexity will ramp up significantly, and the variety between each locale helps keeps things feeling fresh. Castles are dark, so a spell that provides light will help you see, for instance, while the ice area has more platforming and anti-magic crystals. 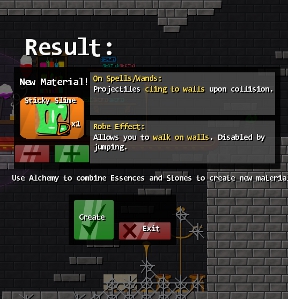 Initially, Magic Maker's crafting system may seem like regardless of fancy schmancy effects you're still going to be leaning towards what makes the biggest bang... and you sort of are, especially when it comes to bosses. However, the enormous variety of combinations and effects available, especially when you unlock extra slots, is more than a little staggering, and experimentation is a ton of fun. Since each component reacts differently in robe or wand and spell, you can return to the academy and tweak your equipment to your heart's desire to try a new loadout when you're getting beaten... or randomize things for a challenge. Though difficulty initially ramps up very slowly, once Magic Maker gets rolling things turn into pure zany, off-the-wall fun. It's an extremely light-hearted game with a great sense of humour, and it doesn't hurt that it's easy on the eyes either. Addictive, off-kilter, and packed with tons of customisation, challenge, and projectiles, Magic Maker is simply a blast.

Played a previous version of this and the spell system was a lot of fun. The gameplay gets a bit repetitive, unfortunately.

I just made an account just to comment. I recently discovered this game and played the demo and just now purchased the game. The sound track is amazing, too. Just thinking about the millions of combinations that you can create just makes we wonder what in the world were the Devs thinking.