Ever wake up and say "I need some adventure in my life?" or "What I really need is to drive myself insane looking for cunningly hidden object pieces in ridiculously picturesque settings." It's ok, you can admit those kinds of things here, and Magic Encyclopedia: Moon Light will fill that "magical journey sprawling over five continents" adventure/hidden object gap you've been looking to fill. 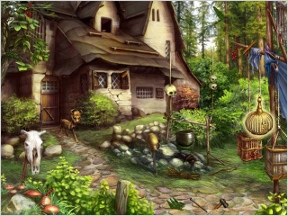 Developed by Alawar and Vendel Games, Magic Encyclopedia: Moon Light is the sequel to Magic Encyclopedia which put you in the shoes of a young magic student, Katrina, running all over the globe in search of her brother. Moon Light features a slightly older Katrina who is still a student at the Magic Academy. Now, however, she's drowning in homework and plagued by terrible nightmares. Salvation arrives when an origami messenger crane brings news that your professor has disappeared and your brother is hot on his trail. Katrina must make a momentous decision: homework... global adventure... homework... who are you kidding? Get moving!

Essentially a hidden object game with adventure elements, Magic Encyclopedia: Moon Light takes you from a Mayan temple to a Russian cottage, from a German castle to a Pearl Diver's hut in the South Pacific. The messenger crane comes along for the ride, giving a quick tutorial in the game's dynamics and leading the player to each scene as the story unfolds. The premise is simple: in each scene there are certain objects that need to be found. However, like Flux Family Secrets, the objects are broken into pieces, which can make gameplay a little tricky. Once assembled, items can be used in scenes to unlock more items or unlock some surprisingly tough mini-games. And don't forget to collect the jewels to activate the professor's amulet!

Navigation through the scenes is quick and easy, quite an improvement over the original game. Each area can have up to four different locations with scenes that are interconnected. This means you'll need to move back and forth to amass all object pieces to complete a section. Despite this complexity, none of the sections involve more than two separate locations, allowing the player the choice of participating in small doses or devouring the game in one long marathon. Movement between connected areas is accomplished by clicking special coins in the control panel, allowing you to travel back and forth between a Chinese temple and a Mongolian Yurt with ease. Cursor changes indicate areas that need a closer look (eye), mini puzzles (question mark), things to take (hand), things that need manipulation (hammer), and doorways to other rooms (animated legs). When encountering something new the friendly messenger crane appears to give helpful advice. 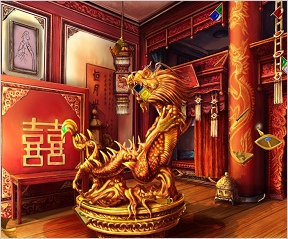 Analysis: Sequels can be worrisome. Things that are minor annoyances the first time around can become major aggravations if allowed to continue. No such problems here! Gone are the slow load times and slamming doors between scenes that plagued Magic Encyclopedia. Gone also is the clumsy and annoying "search for (blank)" to acquire more hints. Hints are on a refilling timer, and a timer to skip the mini-games is also a welcome addition. The mini-games themselves are less "I've seen that before" and lean more towards pure logic. Animations between the scenes run more quickly while imparting vital story information. One of the bright spots of this game is the method of dividing the adventure into stand-alone bite-sized chunks, making it perfect for casual gameplay.

Finding object pieces can be tricky, as its more difficult to find abstract shapes than specific items. There's very little of the standard "hiding pieces behind other things, having them lurk in dark corners, or burying them in tons of clutter" that characterize so many hidden object games. No, the object pieces lay boldly on top of the scene, blending in so cunningly that it will amaze you even as you move towards permanent eye-strain attempting to find them.

Magic Encyclopedia: Moon Light is a solid, satisfying, stunning addition to the adventure/hidden object genre. A beautiful game to get lost in!

Note: When there is more than one spoiler for a location you will find the screenshot with all items always in the first one
Chapter 1 Tutorial/Monastery

Chapter 4 - Asia/Temple of the Golden Dragon

Chapter 7 - The Wizard's House and Labyrinth

Egypt - Room behind the Guard

Egypt after the Art Museum

Venice - in and outside

And as always thanks to Kayleigh for the great walkthrough :D

Note: When there is more than one spoiler for a location you will find the screenshot with all items always in the first one
Chapter 1 Tutorial/Monastery

Chapter 4 - Asia/Temple of the Golden Dragon

Chapter 7 - The Wizard's House and Labyrinth

Egypt - Room behind the Guard

Egypt after the Art Museum

Venice - in and outside

And as always thanks to Kayleigh for the great walkthrough :D

Bought it, played it, it's a good game. I like games that add non-math logic puzzles to them.

Jay, I just tried your pink mini-game on the right side of the banner area. How Knytt of you. Heh. :)

[Edit: it was created by Tonypa for us, and there's a page with comments for it: https://jayisgames.com/archives/2009/07/tiny_game.php -Jay]

I am near the end of the game and I have been told to find gems. I found all but one at the beginning of the game where you are in the cellar and the symbols are on the floor. I pressed hint for the gem but nothing happens. I can't do the last part until I find the gem at the beginning. What do I do

The thing with the hints not working on the gems happened to me too.

Go out to the map and look closely, there will be a gem hovering over the scene where you missed one. Click on the symbol for the scene and click play. Once you are in the scene where the missing gem is the hint feature will work. If this does not work there may be a bug in the game. Your best bet in that case is to contact the vendor where you purchased the game and see if they have a fix.

Note: the hint will not work for the gem if you are in the incorrect scene to begin with.

New here, love the game, am stuck on a mini game, was looking for help.

Which mini-game are you stuck on? Have you checked out the walkthrough above?


I have completed the game " Magic Encyclopedia " and want to play it again and even though I have changed the players name it still won't let me start over again, what can I do?

The game should start at the beginning with a new player. If it does not, this may be a bug in the game. Contact the vendor where you purchased the game for a technical fix.

How do i find the string for a bag outside a hut in asia? i'm really stuck.

Having problems with the hut in Asia. I think I need to find a string for a bag outside the hut, but having a real hard time finding it.

You will actually find the rope for the bag inside the chinese temple, which is the twin scene to the hut.

Yeah I finally figured that out, thanks. But now i have a problem with the monkey - i gave him the coconut milk but he won't disappear. I can't get past him .

If you pierced the coconut with the sharpened stick, put the coconut milk in the bowl, and gave the bowl of coconut milk to the monkey the monkey is supposed to leave. If he doesn't, this may be a glitch in the game. Your best option is to contact the vendor where you bought the game and see if this is a known bug.

Hi, Just got the game and love it. I'm stuck in the Fortuneteller's cottage trying to work the spell. I can't get the ingredients to go into the pot, or the fire to rise when I poke it. what am I doing wrong?

I am stuck on the magic box, I do not know what to do with the flowers or the candle. The hoop around the magic box, but what goes in the box? Thanks in advance.

Did you get the note with the recipe? You can't start the rest without the note.

Have you tried looking at the walkthrough above? It should tell you what needs to be done.

I am on level 4 where you climb in the window of the castle, I have all the stuff but one small piece of wagon wheel i go in the back room and its dark help please lol

Diane-wagon wheel
Did you have a look at the walkthrough on top of these comments? Or is it more a technical issue, you are talking about? Then you should contact the customer support of the vendor you purchased the game from.

I HAVE THE RUBBER AND THE NUT I CAN'T GO BACK TO MUSEUM ?