"Hey buddy! Want to know how I got in here? No. It's not because I'm crazy. Or just because I'm crazy, rather. I mean, who knows what sane is any more? Anyways, it all started this one day where alien monsters from outer space deployed upon our unsuspecting planet, and I was the only one prepared to blast them into their component smithereens... Wait, no, don't fall asleep!" Madville, an arena shooter/brawler by Umut Dervis, shows that when the world has gone mad, a little insanity can only be an advantage. Move with the [arrow] keys and aim your weapon and fire it at the alien monsters using the mouse. You start out melee-ing with a short-range punching boxing-glove gun, but dead alien monsters drop weapons to be picked up with [spacebar], along with coins to spend on upgrades between levels, various power-ups, and, of course, the mystery box which, when picked up, will activate one of a number of random effects. And we do mean random. 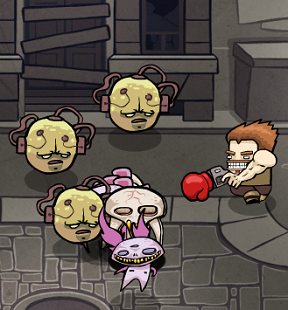 Defeat all four waves in all fifteen levels and, well, you'll see how you got here to begin with. Games with one-man armies facing off against wave after wave of snarling monsters are nothing new, but Madville gives the concept a shot in the arm with its focus on close-range combat, a large variety of creepy monsters to mash, and cut-scenes eager to poke fun at the tropes of the genre. (What the heck is a "research point" anyways?) Some of the game mechanics aren't perfect: it would have been better to allow an automatic armor and weapons pick-up, rather than having to hit the [spacebar] each time. That seems so incredibly minor to mention, but it'll likely be the cause of more deaths in the game than anything else. Still, overall, the Madville experience is as balanced as the protagonist isn't. U MAD?