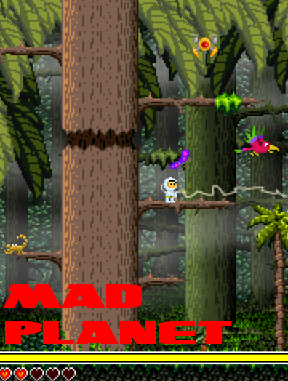 You might think that the combination of Boys' Life, the monthly scouting magazine for ages 6-18, and retro-action-meister Hamumu make for an unexpected pairing. Heck, I was a cub scout and even I find it a little strange. However, I do know that when the creator of the Robot Wants series releases a flixel platformer based around a trio of differently-abilitied characters fighting their way through an alien landscape, I don't care if it's Tiger Beat or Cat Fancy: I'm there. That game is Mad Planet, and it's got quality worthy of a merit badge.

Generally, using the [arrow] keys to move, the [Z] key to jump, and the [X] key to fire your weapon, you and your animal companion traverse the five biome of the Mad Planet, ranging from the flora and fauna filled Deep Jungle, to the robotic Scrap Yard. Before each level, you choose your player character to control, each with various strengths and weaknesses: Pedro (Boys' Life's mailbag burro mascot) has a double jump, the ability to throw block clearing mail, and can float on water. Pee -Wee Harris (the First Class Scout who appears in a monthly comic) can jump off of walls, has a slingshot which releases a barrage of rocks when fully charged, and is an accomplished singer. Dredd Speed (... who's an astronaut I don't recognize, and likely showed up after my subscription ran out) has a jet-pack that allows you to hover by holding the [Z] key, a comparatively weak laser stream with excellent range and aiming, and sinks like a rock in water... Part of the fun is discovering the different paths and strategies you use for each character in each level. Coming along to help is an animal companion of your choice: Mad Monkey, who attacks enemies for you, Blockatiel, who shields you from attack, and Flutterguy, who occasionally heals you. Collecting the various power-ups scattered around the levels increases your abilities, with a specific one for each character. Good luck!

I suppose that the elephant in the room is that the sponsorship seems a little out of place. Truly it has no real bearing on the quality of the game, but really, there haven't been mascots so blatantly tacked on to a concept since that NES game where the Noid battled people with trading cards. However, judged on its own merits, there's quite a bit to like. The multiple characters allow for some interesting customization options and borderline non-linearity, the graphics and sounds are classic arcade, and frankly, I'm probably going to enjoy most games that let you have a lower-primate on your team.

A word of warning though: this game is tough. T-o-u-g-h, tough. While it's not quite I Wanna Be The Guy, it's at least "Early Castlevania Game" level: lasers fly around the screen, health is sparse, perfect jump timing is required throughout, and those friggin' birds could give the ones in Ninja Gaiden a run for their money. It took me, like, six tries to beat the boss of Sticky Swamp (just barely, using Dredd Speed), and that's only the second level! Be sure to pick up every power-up you see. You'll need them.

While its challenge might be above the 6-18 demographic, Mad Planet is really a lot of fun. The levels are few in number but offer quite a bit of replayability with the different characters. When it comes to difficulty, though, by comparison, making a fire with two sticks is easier.

Horrible control scheme. AFAIK, you can't aim up without first jumping up. Had a bird camped out just above me, and he ate up a lot of health as I tried, several times, to just tap up without jumping so I could fire at him. Maybe I'll come back to it later when my "disgust" bar goes back down, but probably not. Surprisingly antifun, considering it's from the guy who made some of TEH FUNNEST PLATFORMERS EVAR.

Thanks again for making a game unplayable because on european keyboards X and Z are not neighbors - and you really need to be be a finger artist to play it!
Why do game makers do the same mistake over and over again??

Revisited it. Was Humumu MAD at Boy's Life, or something? While I noticed a lot of the same mechanics as the "Wants" games...did he have to use the same bossfight music, too? For SHAME :D

Spackobert, at least on my keyboard, you can jump with the up button as well, so you shouldn't have a problem there.

did you know there is a very easy way to use your y as a z? press alt+shift, tadaaa.
but still, there is no need to do this in this game, because you can either use z OR the up key.
so no need to talk bad about a really nice game!

I didn't give this one enough chance. I find the aiming system frustrating. But it looks like a lot of love and care went into this game, so I might give it another shot later :)

@shelly:
Thanks for the Alt+Shift - Tipp!! I didn't know that it could be so easy!
I didn't want to make the game itself bad because it isn't - now that I can play it's demanding but great!

Dredd Speed isn't from a comic, he's just a character they invented for one of their other games and they used him in this one.

Am I the only one who is reminded of Ironhead whenever he sees the first robo fish in that swamp?

Come on, guys, it's really not that bad. It's not terribly exciting or groundbreaking, but certainly not worth so much rage.

And I don't think not considering European keyboards is a "mistake" on the developer's part. I'm sure it's frustrating, but certainly most developers consider their primary audience, especially in a game made for the Boy Scouts of America. I know it's a popular accusation, but not everything Americans do is a result of cultural insensitivity. I am frustrated when a game is difficult to play with my track pad, but I don't blame the game maker.

Not everything needs someone to blame; some things just are.

Spackobert, y works for jumping too and you wouldn't even need it because you can also use the up arrow key ;)

Managed to beat all the levels, but level 4 seemed to be the hardest by far. Both the parrot and the monkey seem kind of useleless, so I didn't bother using them much.

Overall, I'd say that this game deserves an exploding chicken cheer.

Wow, I thought the game was actually really fun. Definitely with the butterfly and the space dude; the other characters are obnoxious. Yes, the aim scheme could/should be better. Oh well.

Really? I beat the boss that took you six times on the first time, and I'm in that 6-18 bracket that apparently is just waaaay too young to play such an oh-so-challenging game. Age isn't everything, you know.

I'm actually disappointed with how short and easy it is compared to the Robot series.

It's just frustrating that some of the upgrades are impossible to get because of the character you chose doesn't have that ability to break through or reach to those places. But the game keeps count of them making you think you ought to be able to get all of them.

Has the potential to be a better game, but a bit misleading and not as fool proof as the Robot series.

I apologize. I did not mean to imply that young gamers could not rock platformers. Certainly the fact that you were able to figure the "jump in the dark gaps in the spike to reach the top of the corkscrew" before me is enough of that. If we meet up, I shall buy you dinner as an act of contrition.

Even if you need a booster seat.

I am unsure how to lower the weak point for the second boss for all the characters. Help?

Well, game's too easy. Don't know why the reviewer said though, especially when compared to I Wanna Be the Guy.