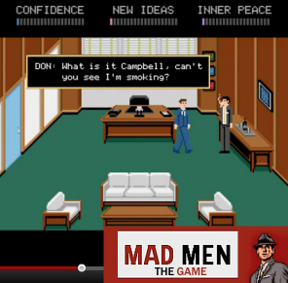 He's one of the coolest guys on TV, a beloved famous character despite being an alcoholic, masquerading, chain-smoking philanderer. Don Draper: he always wins. That is, as long as he's stealing ideas from his secretary, overstepping uppity junior execs and placating his beautiful ex-wife. Hence your mission in Mad Men: The Game, a YouTube interactive fiction game from The Fine Bros in which your choices determine Don's fate—continued confidence, good ideas and inner peace, or an untimely and embarrassing death—as well as the success of his Madison Avenue advertising firm.

Written and directed by Denny and Rafi Fine who are clearly fans of AMC's well-acclaimed series, Mad Men: The Game is full of inside jokes and pokes at Don Draper's foibles as well as the show's iconic standing. It certainly invites discussion of our cultural perceptions and of how something once praised for its originality is now, through its ubiquity, so cliché. The artwork and music by DoctorOctoroc adds to the fun and overall pitch-perfect mood. It can be disappointing, though; several scenes look so fun to play, causing fingers to twitch over the controls wishing it was a true platform game. Nonetheless, there's enough to keep your somewhat passive involvement with its three possible "good" endings as well as four dead ends, all of which come about according to your decisions when prompted. Click the option you prefer (before time runs out) and you'll be sent on to the next video via a new link. Considering the plentiful opportunity for do overs, feel free to take some risks. Don Draper would.

Fans of the show will probably get a bigger kick out of playing this than those who have never watched, yet even if you've only heard about Mad Men in passing, the jokes about the sexist 1960s cocktail and cigarette-crazed culture easily glean your smile. Mad Men: the Game is more fan fiction than satire; it does hold back on some punches and isn't quite as sharp and acerbate as the show it pays homage to. Yet it's an entertaining and enjoyable adventure into the advertising milieu that once was (and perhaps still is, albeit more subversively) part of our social norms.

Dead End 1 - Shot Through the Heart, and You're To Blame

I keep killing Don off! The only other ending I've found is

Don saves the company (although obviously he doesn't)

What is the third?

I did find the meta-narrative pretty funny, and some of the lines are excellent, especially Peggy's.

Dead End 1 - Shot Through the Heart, and You're To Blame

I really couldn't get into playing this. Ironically, the ad-laden Youtube gets in the way of the gameplay. I was hearing ads in the background and Youtube's mechanisms seemed to work against the game, for instance when making a choice. If you let it run for too long, you lose the choice screen and have to backtrack a bit. If you pause it while trying to decide, you sometimes get a screen full of adsense. Something with less ads would have made this work better, I think. Something like Vimeo.

Yes, it would be nice to play this on a different platform. The needing to decide quickly acts like a game mechanic, though.