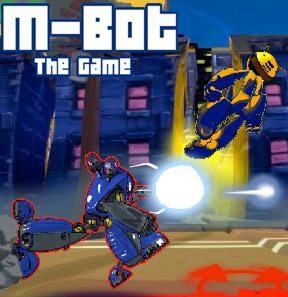 Newgrounds.com, like many large web communities, has a labyrinthian body of insider lore and mythology. One such mythological creature is M-Bot, feared adversary of spambots and griefers, friend to the little guy, hero to the everyman forum poster! At least I think that's what he is. Folklore can be a bit opaque to outsiders like myself. At any rate, it was inevitable that M-Bot get his own game, and two Newgrounds denizens who go by Mindchamber and FrostedMuffins have risen to the task with aplomb. M-Bot: The Game is a gorgeous, shiny, frenetic gem of a 2.5D shooter with style to spare, where you pilot M-Bot through the urban ruins of the Newgrounds community to disable spambots and make the world safe for friendly posters everywhere.

The first thing you will notice is the control selection screen, rendered cleverly in 8-bit style, to play off the more polished look of the actual game. You can choose between using the mouse to move and fire, or using the [arrow] keys to move and [S] to fire. The [spacebar], or [D] if you prefer, makes M-Bot jump, and [Z] executes the "Special Attack" when the opportunity arises. Not to boss you around or anything, but you should really choose the keyboard controls. Trust me. The mouse control feels pretty slick, but you will inevitably scroll off the playing field and lose control of M-Bot.

This is not a relaxing game. The core gameplay lies in collecting shields for points, which also represent your health; and in shooting the yellow spambots, who also yield shields. Shooting the same spambot multiple times yields more shields, and even power-ups which improve your weaponry and give you your special attack. Numerous other challenges spice up the gameplay, like avoidance tasks, a mini-boss, and a very clever boss fight. The rapid pace of these events, coupled with clever animation and sound design, makes for a very intense experience, such that I actually gasped when the final boss started throwing...well, I'll leave it a surprise. 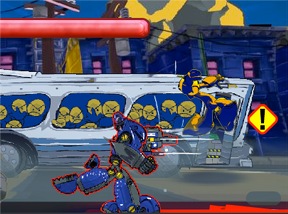 Analysis: The first thing you will notice is that the game takes a long time to load, considering that the playing field is so tiny (the loading bar on the right becomes the play button when the game fully loads, by the way). The second thing you will notice, once the game loads and you get to playing, is that the loading time is worth it. It's a colorful sensory extravaganza, and the amazing look explains the cost in file size. Filters, lighting effects, particle effects, and the scrolling 3-D background: These don't come cheap, but golly, do they ever make the game look pretty. Mindchamber claims the game takes its inspiration from an old isometric shooter called Zaxxon, but I thought of the more recent Viewtiful Joe. That game was widely praised for its visual style, and to achieve that kind of look in Flash is remarkable. Even the control selection screen is rendered cleverly in 8-bit style, to play off the more polished look of the actual game.

The best presentation won't mask a lousy game, of course, and M-Bot doesn't disappoint, though there is a catch. Even with the keyboard controls, it can take a moment or two to get a sense of how to orient yourself in the pseudo-3D playing field. Moving M-Bot left and right is not a problem, but motion upstage and downstage can be a bit tricky to determine at first. Thankfully the developers give you many visual cues, not least of which is the bright red line projecting horizontally from the protagonist, to help you judge your position in space. I adjusted fairly quickly, and given the visual style and fast-paced gameplay, I actually don't think they could have done a better job of this than they did.

Mindchamber admits that this is an unusually resource-intensive game, and calls it an experiment not likely to be repeated. Not everyone will get past the extensive load time or the processing requirements. But it's a grand foray towards the bleeding edge of what Flash gaming can do, and a successful experiment at that.

all I'm getting is a red screen after the loading bar becomes 'PLAY'. Anyone else getting this? I'm using Google Chrome, and that seems to have endless trouble with all things flash for me!

This game was cool, but waaaaaay to short. I was expecting more than one kind of enemy and two bosses.

This game was really cool. It was stunning because the last thing is was expecting to see was a 3-D side scrolling shooter! It was cool, and confusing. But none the less amazing!