Lylian Episode One: Paranoid Friendship is a new horror-themed platform adventure from Pixelpickle Games. You play as the titular Lylian, a girl who may or may not be completely unhinged, as she tries to escape the mental institution she's being held in. Unfortunately for her, it seems like something much more sinister is going on, as nurses, other patients, and even the janitor are working to thwart her moves. Using Lylian's "imagination", you can change the scenery to make your way through the dark and disturbing passageways in and around the twisted hospital. 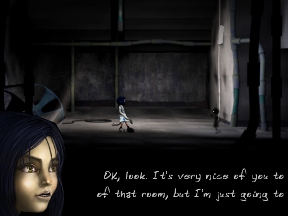 Lylian controls like a typical platform game, though there's less emphasis on reflexes and timing than most games in the genre. You can walk, you can jump, and you can use what could be the most curious form of attack in any game: untied sleeves from your straitjacket. Customize the controls as you like from the settings screen, then jump right into the game. Or, more likely, timidly ease yourself in, comfy pillow at your side.

As you move through each area, you'll be confronted with enemies and a few obstacles. Use your whip-like sleeves to take out foes, gathering the glowing sparks that float from their defeated bodies. When you fill both meters at the bottom of the screen and the Lylian in the center grows up, you can utilize one of two different mental states (after you obtain them) that are key to making it through the game. The first transports you to a colorful field full of leaves, trees, and... bees. Moving to these alternate worlds allows you to pass certain obstacles and evade enemies. If you're ever stuck, try switching to another mind mode and exploring. You can also send out your teddy bear companion to crawl through ducts to open doors and such, something that, in the context of the game, will rattle you in its own way. 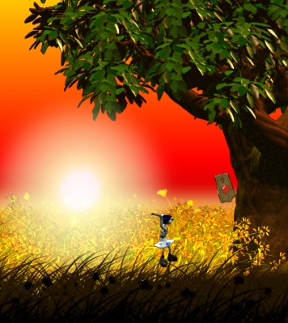 Analysis: Lylian's story and setting easily place it on a high shelf with other horror games like Amnesia: The Dark Descent, Sanitarium, Still Life, and more. Right from the beginning cinema you'll realize you're in it deep, as the imagery is as surreal as it is disturbing. There's a pervading sense of un-reality in this game, meaning you're never quite sure what's real and what isn't. Even things that affect you as "real" may be completely fake, and real obstacles vanish when you enter one of Lylian's alternate states of mind. The experience leaves you a bit unhinged yourself, which is a very good thing.

And now for the bad news: the first episode of Lylian is very short. You'll probably only get an hour or two of playtime out of this release, though there is some incentive to go back and play again and collect the things you missed. Seeing as how the story is a major part of what will draw you to the game, it's somewhat disappointing to see it developed so little in this first episode. Still, with future releases in the works, hopefully the short length won't feel so bad when subsequent installments are out.

It may be a short experience, but Lylian: Episode One packs enough horror in for a full evening of "what the heck was that am I going mad?!!". Its gameplay is a bit overshadowed by the setting, but the only area it really falls short is its length, a blow somewhat softened by the budget pricing. Here's hoping episode two comes along soon!