Lumen, by Thousand Cranes Studio, is a freeware indie action adventure that's smack-your-grandma gorgeous, though not without some hiccups. You control a little girl who awakes in a bizarre, surreal warped fantasy nightmare land who has no choice but to follow the voice leading her deeper within the dream. With the help of a camera that can let her see the invisible and manipulate objects, she sets off to jump, sneak, and puzzle her way through four different areas of dreamland. The camera will allow her to take pictures that can manipulate certain objects in her environment, and its flash can reveal hidden secrets and platforms to make her way forward. Just be wary of enemies... when our heroine's jammies go from calming blue to five-alarm-red, you'll need to run and hide when sneaking fails you. Fortunately, the game has frequent checkpoints, and after a Capcom-esque YOU DIED screen, you'll be booted back to the last one you passed to try again. 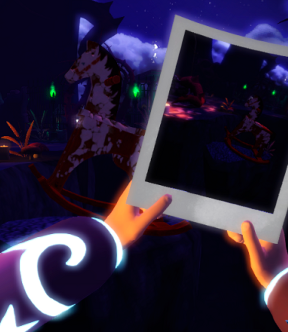 Lumen is an absolute stunner of a game, a sort of visual cross between American McGee's Alice and Coraline. The rich, creative environmental and character design and the beautiful colours that make them up, makes this the sort of game you could spend a long time gawping at like a tourist. On the other hand, consisting of only two real levels and a rather abrupt ending stage, Lumen winds up feeling more like a demo than a complete game, especially since its camera concept doesn't get explored, or really even explained why its there, as much as it could. I would love to have seen the camera mechanic used in more creative ways, and more often, in lieu of the tedious stealth and platforming sequences that make up the lion's share of the second stage.

Still, Lumen is an absolutely beautiful, if far too brief game, and well worth the short time it'll take you to play, though hopefully it gets revisited, and expanded, at some point in the future by its clearly talented team.