You'd think washing up on a lone island would be an improvement over slowly sinking alone at sea in the middle of the night, but that's only if you don't wind up on Lumber Island. In the first chapter of this free indie horror adventure from DeanForge, you've got a cell phone for light, but no signal, and that flickering firelight in the distance looks awfully welcoming. After all, anything is better than drowning on this cold, windy night, right? Just use the [arrow] keys to move, [spacebar] to jump, and the mouse to look around. You'll automatically pick up any items you walk over, and the game will use them for you when you need them. Keep your eyes open and your wits about you since you're not alone, and you'll have to start all over if you bite the axe. 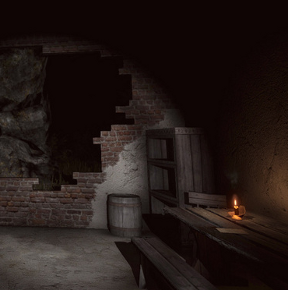 Lumber Island is one of those games that will make you cringe. Not because it's gross or violent, but because the subtle sense of wrongness and oppressive creepy atmosphere will have you dreading every noise, every shadow, every corner. It quickly becomes apparent that there's something more than a little otherworldly going on, and initially the sense of disorientation and mystery only adds to the fear. The problem is that Lumber Island lacks any real player direction, and since you can't sprint, slowly walking around trying to figure out where you're headed or where something you may have missed is in the gloom quickly becomes frustrating. Lacking anything so grand as a save feature and slowly but implacably pursued by a one-hit KO antagonist, dying means starting all over from the beginning. The annoyances mount and strike against what is otherwise a visually stunning and exceptionally immersive adventure with an almost palpable air of menace. I was playing with the sound off, and after creeping through the darkness I uttered a literal shriek when I turned around to find something wholly unexpected lumbering through the doorway after me, blocking the exit.

Once you figure out where you need to go and what you need to do, Lumber Island won't take you very long to play, and despite its flaws is still well worth checking out. With some polish and constructive design feedback, the rest of the upcoming chapters could wind up being something really special. As it is, it's weird, it's freaky, and it's an entertaining, menacing ghost story that will leave you wishing for a map and some running shoes, but will deliver a few scares and some unanswered questions for the next installment.