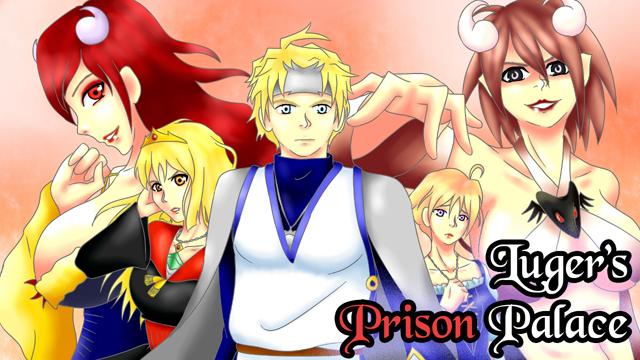 After coming home to his besieged kingdom, Luger Huntress finds himself imprisoned in the arms of another, along with his beloved sister Lotti. Much to his horror, he finds that his sister Lotti is to be engaged to one whom he regards as a heathen, a member of House Greaval. Ultimately having no other options, he reluctantly bides his time in the castle, where he begins to make himself at home. But even as his plush surroundings begin to grow on him, and he sees the House's royalty in a gradually more positive light, he can't help but be reminded that a gilded cage is still a cage nonetheless.

Luger's Prison Palace has a very large amount of text and is intended for those who enjoy story with meticulous attention paid to even the minute details. The graphics mold well with the game, and presentation is overall decent, although having the characters slide on and off the screen when there are more than two talking in a room does seem somewhat artificial and tends to break up the flow. Nonetheless, it presents a thrilling tale (so far!) as the developers continue to refine and expand the story, and I for one can't wait for their next installment. Gameplay is standard visual novel fare, using [Space] to advance text and clicking when prompted for choices. Be sure to save once in a while (and especially when the game prompts you to) as certain choices can lead to an ending that is interesting and not in a good way, to say the least!