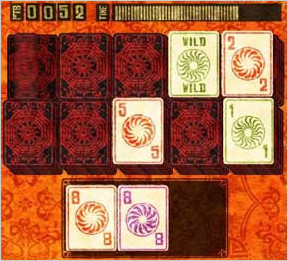 One step beyond Shaolin Soccer, Lucky Eights throws poker into the already freaky mix of martial arts and organized sports. However, rather than contemplating probabilities and attempting to read poker faces, this Flash-based card game requires instantaneous reflexes and precision mouse clickage. Originally developed as a contest for Puma by Pop+Co, creators of the recently reviewed RSVP, Lucky Eights is fantastically polished with attractive graphics and sound, far above and beyond the typical advergame.

Lucky Eights uses a deck of pink, green or orange cards numbered one through eight, as well as a wild card and an evil X card. The game takes place on two rows of five cards each. All cards begin face down, but they rapidly start to flip and fly off the screen; catch the ones you want by left clicking the mouse. When your hand contains three cards they will be evaluated and cleared. Poker hands like a pair or a flush result in points and extra time on the meter in the top right hand corner of the screen. When this meter is empty your game is over, so every hand is a battle of hope versus compromise. Do you settle for the pair of fives or hold out for a flush? Wait for a rainbow triple or give up and try for something simpler? Watch out for that evil X card; not only will it ruin any hand you're attempting to build, it even subtracts time from the meter.

When Lucky Eights was originally released, users able to reach the Shudoh Master ranking became eligible to win the 88th pair of the only 888 Shudoh Tangs ever produced, a super fancy womens soccer shoe. Although the contest is now over the game is still available and well worth a look. Like RSVP, the design of Lucky Eights has a real presence that many games lack, which I attribute to Pop+Co's stated policy of producing physical prototypes of their games. Also like RSVP, there is no mute button and that music gets seriously annoying; 36 Chambers it ain't.

Is it just me or is this game rather easy ?

I am surprised as I find most of the games here quite tricky :-/

I agree, about halfway through the game, I just started clicking everything that came up, watching out for the "evil x" and easily made it to master on the first try.

P.S. Thanks to you, Jay, I'm addicted to flash games.

Takes a few games to get used to, but once you get the hang of it it's pretty easy. 2044 was my best, though I'm sure I could do better. Basically I just wait for 8s and wilds to come around, and if the time gets too low, click on any cards I can until it works its way back up.

Also I noticed a bug: if you click a 3 for the first slot, the card that shows up is actually a 2. It still scores as a 3 though; it's just the displayed image that's wrong.

Yeah, I think it's dead. Shame!

On another subject, hopefully, this is my TypeKey account now...if not, I'll try to figure out how I registered. I love this site!

Thanks for the note, links updated. :)