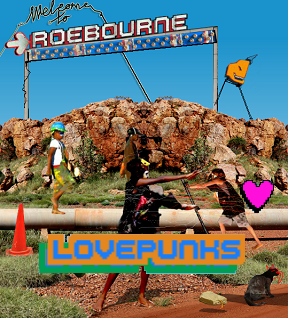 The Roebourne, Australia children's group, LovePunks, first formed when, with the support and technological training provided by the Yijala Yala cultural arts project, they wrote, directed, and starred in their own zombie movie. With the basics of production well-learned, the team decided that their next project would be a platform video game. And so, after five months of filming and photoshopping, the result is here: LovePunks: The Game! After selecting your character, move across the landscape using the [arrow] keys, avoiding obstacles and interacting with the environment. If a zombie comes along, fire a love-shot at them with the [spacebar]. Points are scored by activating animations, and there are 53 in all to find.

LovePunks: The Game is strange, crazy, bizarre, and absolutely wonderful. It has all the energy and vitality that you would expect from a creative group of 9, 10, and 11 year-olds, and they were clearly having a blast putting it together. Though its showcasing of the photo-realistic animations makes gameplay feel a little aimless, overall it is a singularly unique piece of interactive art. The group has other projects on the way, so until then, stay tuned, and stay LovePunk'd!

Good game, and it was obviously a lot of fun to make! It's just a shame the screen is so big >.

Great job, boys! I'm having a lot of fun. I love the ability to be able to walk & do things in so many areas. Oh, and throwing hearts (and the heat tree). Are they to spread the love? This must have been much fun making. Keep up your great work, thanks for sharing, send some more. :D