Love Chronicles:
The Sword and the Rose

Love Chronicles: The Sword and the Rose, a new casual adventure game from Vendel Games, creator of the Magic Encyclopedia series, flings you into a gloomy world of alchemy, spells, sleeping trees, frozen puddles and glowing rose petals. As a prince who is on his way home from an adventure, you encounter a strange island filled with mystery. And ice. Lots and lots of ice. Your boat becomes trapped on the shore, so you set foot to sand and investigate the island's strange sights. 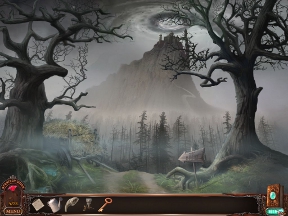 Love Chronicles plays very organically, allowing you the freedom to roam around, explore, gather items and solve puzzles that aren't slammed in your face. The game is focused more on inventory items than hidden object scenes and mini-games, though there are plenty of the latter to be found. You begin wandering through the woods, watching your cursor as it highlights different parts of the screen you can interact with. It seems like everything is a puzzle waiting to be solved, but you need to do some more walking before you can start solving the riddles at hand!

Story plays a big part in Love Chronicles, and it's told through a series of short cutscenes at key points during the gameplay. The style in which the plot unfolds is very much like a fantasy movie, with poignant facts dropping in your lap when you least expect them.

An interesting inclusion in Love Chronicles' gameplay is the red rose by your inventory. Your overall goal is to reclaim the enchanted petals so you can return the rose to its owner and break the curse of the witch. The petals are frozen in ice, however, and you must thaw them out before you can collect them. Click the rose, then click the ice and you'll melt just about anything frozen that's on the screen. It's a bit of immersion that makes you feel strangely powerful as well as giving you an effective role in this strange world. 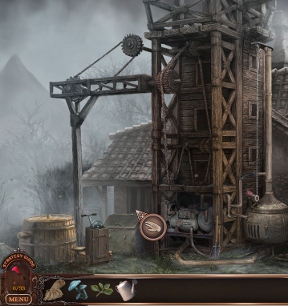 Analysis: Love Chronicles inflates the sense of mystery by refusing to hide puzzles from your view, preferring instead to sit everything in plain sight while you fumble to solve the riddles at hand. This is a bit overwhelming at first, as you'll come across half a dozen pieces of scenery that need your attention and you'll be powerless to investigate further, but the more you play the more you discover, and when that magical inventory item comes along that solves an earlier puzzle, you'll recognize it immediately!

Even though the game seems open, Love Chronicles is just as linear as any other hidden object hybrid. You must have certain items to gain access to certain areas that will give up other items you'll need to progress. So, naturally, things play out exactly as the developer planned them to. But because you can hop back and forth, moving around a dozen or more screens at once, you feel like the world keeps growing larger and more intricate, even though the game never gets too complicated for you to handle. It's a careful illusion, but it was pulled off quite well.

The only real down side to Love Chronicles is its habit of holding your hand, then letting go at the strangest times. The hint system works well, until it fails you when you need it most. If you miss an item, something random you just neglected to pick up, but can somehow continue, the game often fails to recognize this, leaving you backtracking as far as possible, scouring the landscape for signs of a missed object. You're never stuck for more than a few minutes, of course, but since you begin to rely on the game telling you what's needed next, you're suddenly left out in the cold when it just... doesn't.

Love Chronicles: The Sword and the Rose is a great-looking, magic-filled casual adventure game with great puzzles and an imaginative setting. It isn't as filled with doom and gloom as most hidden object hybrids tend to be, it's more of a fairy tale adventure on the darker side of things. Good length, satisfying inventory riddles, and plenty of bonuses to keep you coming back for more!

Love Chronicles: The Sword and the Rose - Walkthrough

This list tells you the scene number for where the item can be found, and where it can be used. Scenes are numbered above each spoiler tag in this walkthrough.

2. Way to the Mill/Backside of the Mill

3. Front side of the Mill/Start the Generator

The crystal is black, the
curse from it hack!
Pure souls from it crying
its forces undying

on top: air - butterfly and eagle.

on the left: water - fish and water drops.

on the right: fire - sun and fire symbol.

on the bottom: earth - paw and flower

I enjoyed the demo of this game, but was extremely surprised when the demo ended after only 40 minutes of game play. I do have a lot of experience in these games, so I had chosen the harder setting and still go through the demo that quickly. I really don't like games that promise an hour's trial and then limit play.

I probably won't buy it for that reason alone (there are so many games like this that I can afford to be picky) but I also felt that, although enjoyable, the puzzles were not that difficult, and the hidden-object scenes felt very jarring (although at least you were only picking up things that were needed)

I think the shortened demo time is just another worrying development in the overall drastic shortening of casual games. I miss games like Mystery Case Files, and, recently, Mystery Trackers, where you can really get immersed in a decent game length and fleshed out plot. Is that too much to ask for a casual game?

Love Chronicles: The Sword and the Rose - Walkthrough

This list tells you the scene number for where the item can be found, and where it can be used. Scenes are numbered above each spoiler tag in this walkthrough.

2. Way to the Mill/Backside of the Mill

3. Front side of the Mill/Start the Generator

The crystal is black, the
curse from it hack!
Pure souls from it crying
its forces undying

on top: air - butterfly and eagle.

on the left: water - fish and water drops.

on the right: fire - sun and fire symbol.

on the bottom: earth - paw and flower