If there is one thing you can learn from fairy tales, it's this: if you defeat a witch, make sure she really goes out of work. Unless you see her break her wand in two and take up a job with an animal shelter, you aren't safe. In Love Chronicles: Salvation, a hidden-object adventure by Vendel Games, we find that the hero hasn't learned this valuable lesson and has to save the day all over again. 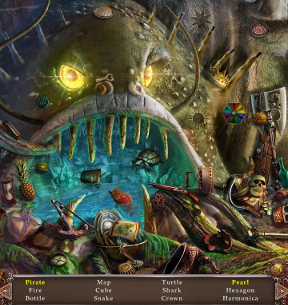 In the previous game, the prince rescued a little island kingdom from Alura the witch and her icy doom. Now he is coming home, dreaming of a fluffy bed and a cup of hot chocolate. When he gets there, however, he finds out that Alura is a sore loser and that she has lain waste to his own kingdom. Determined to deal with her once and for all, the prince decides to go right to the source and try to undo everything that has happened. He travels back in time to find Zander, the dark lord who imprisoned Alura when she was a girl and forced her to be evil. His quest takes him to very strange lands where he meets lots of colourful characters (from fluffy to ghostly) and has to find a bunch of magical gems to break Zander's spell.

Analysis: Exploration is as easy as clicking around the screen. The cursor turns into a hand or a magnifying glass if you can interact with items, and the hidden-object scenes sparkle. There is a map, so you don't have to backtrack, and the hint button is cool – if you are supposed to go back to a scene, it will show you that exact scene, instead of vaguely telling you to move backwards; it can also be recharged more quickly if you catch fireflies which buzz around and drag them to the button. The hint system is very helpful especially because there is an extraordinary number of rooms, so much so that, at one point, even the map becomes too complicated. 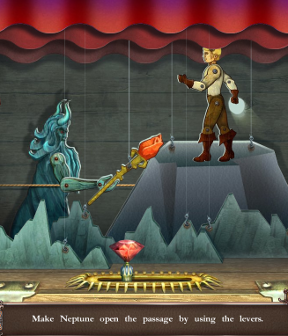 One pleasant feature is the implementation of hidden-object scenes. Quite often they are just a random list of things to find without a real connection to the story. There are some such scenes in this game as well, but others consist of finding parts of an item you actually need in order to progress, or of repairing objects, so they bring some much desired variety. Also, you will never have to revisit a hidden-object scene, and they are quite colourful and unique. Puzzles are plentiful and well made, although often short (which at least means you won't get bored of them).

The game is very nice to you in the beginning, what with the fairy tale story and the flowery environments, but it has much darker plans in store, and even a mildly horrory element or two. On the other hand, the voice acting (which is good, but a bit over the top) and the plethora of peculiar scenes always verge on the ironic, so it's your choice whether to take the plot seriously or not. It's also worth noting that the bonus chapter in the Collector's Edition takes you to a completely different world and has a story of its own, much lighter than the main game.

Probably the most striking aspect of Love Chronicles: Salvation is the abundance and the design of the environments. You'll wander along many corridors and discover many bizarre places and creatures, until you almost forget where you started from and why you're there. It's a fantastic, whimsical journey to go on when you just want relax and lose yourself in a strange and beautiful world.

Love Chronicles: Salvation is currently only available in a Collector's Edition, which includes a bonus level, concept art, wallpapers and more. Remember that Big Fish Game Club Members pay only $13.99 for Collector's Editions (or 2 club credits), and collector's editions count 3 card punches of 6 total needed for a free game.