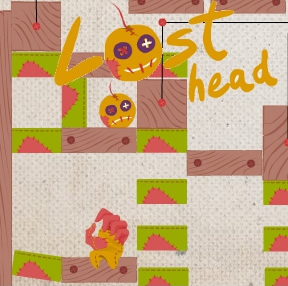 Sometimes a game so weird and charming comes along that, despite its flaws, you have to enjoy it. Lost Head by Garbuz Games is one of those games. This short and simple physics puzzler won't change the world, but it might make you smile with its absurd characters and presentation. It seems that our titular hero has become detached from his friends by an evil hand. Luckily a glove waits for him in each level, ready to be his new body. The trick is getting there.

Each level begins with your round head across the stage from the goal. By manipulating objects as you click on them, the head will roll, bounce, and fly through the level towards the target. All objects are either transformed back and forth between a large blue and small red size, or deleted from the stage all together. Positioning planks over holes and dropping triangles to roll the head the right way clear a path for the player, while releasing boards and growing objects prods the little guy into action. The faster you complete a level, the more points you add to a total.

The real star of the game are the visuals and sound. The levels and characters have a cute patchwork feel, and the living glove in each level lively animates as you play. The music provides a mischievous backdrop to the patchwork world, but escapes the designation of annoying loop music.

For all these pluses, it's a shame that the game didn't go farther with its strong points. An opening cinematic is incredibly weird, and it was disappointing to reach a generic submit score screen after 25 levels. The physics can sometimes be finicky, and the head's momentum slows to a crawl in some levels. More novel use of the grow/shrink mechanic would have been nice as well. Twelve levels contain buttons to collect as achievements, but they're usually not too hard to grab and only unlock one level.

I played through this one yesterday and it is simply and adorable game. Some levels might require revisits but otherwise, it's a nice escape from other physics games.

Fun and not too difficult. (It can't be too difficult because I was able to complete all the levels and get all the achievements.)

There were a few levels where I felt I was just lucky to complete it and/or get the achievement, and there were a few annoying places that required too-precise timing.

Just the right number of levels for me.

Level 21 is frustrating. It's doable, but i don't see how it's possible to get the button with a very healthy dose of luck.