Loot Hero by Varagtp (also available free on iOS and Android) is the sort of brilliantly simple arcade game breaks were made for. As a brave knight out to defeat a dragon terrorizing the kingdom, you're using your lance to bash your way through the hordes of monsters in each stage, picking up the coins they drop along the way to level up your equipment at the stores that conveniently lay alongside the road. To play, all you do is click the mouse, and the hero will charge left or right in the direction of the cursor, and you run into enemies to attack. Enemies will respawn behind you, so you can always go back to grind cash and experience points to level up as much as you like... something you'll need to do to topple the stronger monsters and bosses! 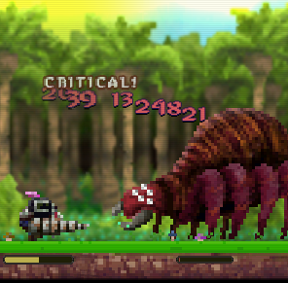 Loot Hero looks and sounds absolutely gorgeous with its detailed pixel style, and though it plays like a simplified Slayin it captures the breezy addictive arcade flash and fun so perfectly it's hard to put down until you're done. While, unfortunately, won't take very long since Loot Hero only has a few levels and there's zero variation to the gameplay. There's also no real challenge to be had, realistically speaking, since the prevalence of towns and the lack of any variation to enemy abilities (like, say, status effects that might have otherwise hindered you and called for strategy) means you can basically just charge back and forth until you're flush with coin and levels. Loot Hero is, in short, a good idea, but one that really needs a lot more fleshing out to be good for more than a single play through. Once you finish the game, it does allow you to replay with stronger enemies, but the lack of any significant variation means there's just not much incentive to do so. The potential is definitely there, and Loot Hero is still a simple pleasure while it lasts, and one we hopefully see expanded on in the future.

its fun until you

Waayy too easy and simple to be interesting, or worth more than two minutes or so of my time.

I was really enjoying this until I encountered the same problem as Jejebob Lopez.
It's a shame there's a game breaking bug, because I'd like to see the end if there is one.

When a game tells you in words to go start grinding there is some problem somewhere.

When has grinding stopped to be a problem we were trying to fight?

When it was contained within a particular game to allow people who happen to enjoy that sort of thing to play it and the rest of us to avoid it should we choose. :)

Game has been updated to fix the speed bug!

There's no difference for me Dora. I'm at a point where I literally can't progress because of the speed thing.
I tried to start a new game and not put any money into speed and it's still happening.

I am the developer :)
I am aware there are some problems with the speed and the camera. I did fix so that the knockback amount should not be as much, preventing you to get stuck in a loop between two enemies punching you back and forth :P

For Flash you may need to clear your browser for the update to get loaded if you have already loaded the game before. You can check the version in the "Info" screen on the Main Menu (click the "i" icon in the top left corner). If there is a small number at the bottom right of the credit board that reads "v.1.2" then that is the correct version.

I am doing updates for Android and iOS to.

There is still a bit hard to control at very high speeds so I am looking into ways to fix this.

Sorry for this, I hope I can solve it, if nothing else I will for the sequel :)

O and btw, be careful when clearing your browser so you don't remove the saves stored in the cookies. (Or you will have to start over). An alternative is to play the game in another browser (Chrome seems to have best performance imo)

ok, I'mnot sure if this is a game related thing or the website... but I'm having to sit through like 4 or ads, just to play the game. 1, I can see. 2, MAYBE (1 for the site 1 for the game). but having like 3 or 4, is starting to get overkill. I dont know if its just me or if others are getting this many.

This is the first game I've noticed having so many ads. One time it actually cut off ONE add, just to play another one. was amusing but weird.

1. Don't ever worry about 'Speed.' It's pointless.

2. When you get to an upgrade location, upgrade 'Defence.' Don't ever upgrade Speed.

4. If you can't upgrade Defence or Attack, upgrade Critical. Don't ever upgrade Speed.

5. Don't ever worry about 'Speed.' It's pointless.

...basically, if you focus on only Defence and Attack, you can't lose.