A gathering of assassins, cultists, elders and the miscellaneous undead? No, it's not a production by the H.P. Lovecraft Historical Society. It's Loot Clicker, the new incremental idle game from TrampolineTales! Loot Clicker takes the standard creature encounter formula typically found in roleplaying games and streamlines it, then presents it on a grand scale. With money earned through farming, you're recruiting a party from among eight different character classes to lay to rest everything that's wrong with the world from insects to malevolent spirits, and using the money earned to recruit still more. Each class has its own properties, which influence what sort of creatures you'll encounter, and will claim their own proportion of the wealth they generate. Encounters will also net you loot, different types of equipment which add buffs to your stats. Predominantly these will be chests and sacks for each of your class types, but you'll occasionally get mouse pointers to increase your clicking effectiveness, potions to add temporary boosts to it, and scrolls that provide major temporary buffs. 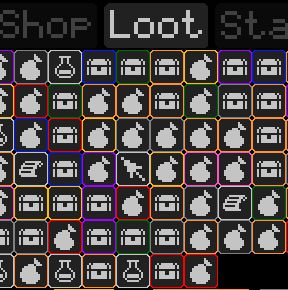 Loot Clicker's interface is entirely mouse-based. The Shop allows you to buy rare pieces of equipment that don't show up as loot, but its primary use is to let you sell off loot that's inferior to what you already have. The equipment buffs and inventory system management are really what set Loot Clicker apart from most idle games as each character class has a slot for exactly one chest and one bag, and finding the best ones to keep means comparing all the loot that washes in with whatever you currently have equipped. It may not be as elaborately-designed as, say, DPS Idle's system, but it's an enhancement we're glad to find emerging in the genre. It may be new on the scene, but Loot Clicker has already generated so much interest that there's a sequel in the works with even more classes, items, and quests which replace the original's achievements feature. Until then, idle fans will find that Loot Clicker satisfies those inventory managing, perfectionist OCD tendencies nicely.

Ooooh. Huge flaw. The game doesn't work when it's in another tab. For an idle clicker, this is terrible design.

That's strange... it does indeed run for me in another tab in Firefox. I can confirm it works just now!

Same problem here, John C. If Loot Clicker is in an unfocused tab it pauses.

It works properly if I undock the tab into its own window, though. Unless I minimize that window, in which case it pauses again.

That's very strange. I have the same setup (Windows 7 Pro, though) and it isn't pausing for me. Remember, in the beginning you won't be getting a continuous stream of cash until you have enough heroes to kill monsters faster, so the sporadic money might make the game seem like it's pausing, I suppose. Beyond that, it seems like something you might need to report to the developer if the problem persists. Sorry! :(

It does continue to run in another tab, albeit more slowly (Chrome, Win 7). If I pull it out into a separate window and put that up on another screen, it still runs at full speed even when I focus off of that window. Strange.

Anyway, this is a neat little clicktoy while we wait for the big Cookie Clicker update. It doesn't require constant babysitting, but you do need to check in every now and then and spend some money.

My only issue is the loot management. Once loot starts flowing in, it tends to come too fast to check whether it's an upgrade or not. In the time it took me to type this I just got 24 pieces of loot. Loot either needs to auto-sell if it's a downgrade, or provide some visual cue that it's an upgrade, such as showing the current piece next to it, with respective values. Or, just make it more rare.

Loot desperately needs a way to automatically compare it to what you already have equipped, if not an auto-sell for anything that's less valuable than such. Otherwise, it's a nice idle game.

Slow updating is not a developer problem. It's something that Firefox does automatically. The developer can fix it by looking at the actual time though and calculating things that way.

There's a config you can use to turn slowdowns off by creating a text file somewhere in your system, but it's not a good idea.

Just leave it in its own window to keep it at full speed.

This was ok at first but after I left it overnight, there was so much loot to go through and so much lag that it became tedious. Even trying to sell items was slow. Maybe it's just my computer but the lag was annoying and the inability to easily compare loot to what I already had was deal breaker.

Ok, I ended up cheating by

giving my undead a one-undead-every-9-kills chest

That seems to be the required method to win. Without cheating, it would have taken forever.

Meh. I played this game a couple of years ago on K, thought this might be an update. Same stat bonus caps on items, same +200% boost caps on potions (even though they're supposed to go to 300%). Still kinda fun to play through again, it's a good concept that needs some serious mechanical work. There's supposed to be a sequel with new goodies coming out eventually, hope to see it here.

Why would you need to cheat to get through this? It takes maybe 4-5 hours of idle time to get to the point where you can

Also, don't worry about checking every single item against what you have, that's crazy. Just get an idea of what the maximums are, figure out what bonuses you want, and scan quickly for those. If you accidentally sell something cool, who cares? It's not like there won't be another one waiting for you when you come back.

Ah, well what happened is by the time I had enough people for the endgame (people I acquired through cheating), each person cost more money than even my save-editor-enhanced coffers could afford. In contrast, when I was playing legitimately, that group of people went up at a glacial rate by themselves, maybe 1% every 10 minutes, and I got quite bored.

This thing needs a "sell all" button... Because I seriously don't give a crap what is there, I just want it out of the way.

Hi guys! TrampolineTales has mentioned that he's taking all the user feedback here into consideration in developing the sequel. I thought you'd like to know that, so if you have more constructive criticism be sure to leave a comment!

My constructive criticism is: the game should be interesting. An excel spreadsheet is not fun. Add something where the user has to think in a clever way, or use some special trick, or realize something about the structure of the game. Grinding doesn't make a game by itself.

In fact, one of the games that started the whole idle game craze, Candy Box, had NO GRINDING AT ALL. At every step in the game, as long as you figured something out, you could always proceed to the next step. This constant quest for discovery was what gave it its charm.

Well I guess I cannot buy an undead because it costs

If I am going to receive higher quality items shouldn't they be worth significantly more? MY best items that I am using are only worth a few thousand, maybe in the 10,000's. I wouldn't have to get sooo much loot if it were worth more. The wait to get all the achievements is a significant amount of time. I do however like that certain things like click value increase on their own over time; that is a nice feature.

I haven't gotten all the achievements yet, still two characters to upgrade plus the money.

It runs the CPU awful high for a clicker game.