PhilllChabbb's puzzle game Lone Ghost & Cat is difficult, but mainly because figuring out how to play is sort of like trying to assembling Ikea furniture going by the vague drawings someone is holding up in a window across the street. As the title of the game suggests, you are a ghost. Specifically, a Patrick Swayze sort of ghost, in that you can move things by expending energy. Your goal is to climb a towering apartment building for unknown reasons, solving puzzles in each room to proceed. You use the [arrow] keys to move, [Z] to interact (mainly pushing and pulling), and [R] to restart a room. As you move physical objects, you'll notice you start to become more and more ghostly in appearance until you can't move anything any longer and you can, in fact, pass through objects. This presents a problem, since the exit on each stage only appears when you have a lot of energy, and the more you expend, the more the door dwindles. Fortunately, you can absorb energy from certain things with a lot of it to spare, such as potted plants, but holding [spacebar] near them, though doing so repeatedly can drain these things dry until they're no longer of any use to you. Where does the "cat" come in? Well, after a few stages you'll wind up with a feline companion you can have follow you around and drain the energy from things you can't, turning into a walking spectral source of ghost juice. 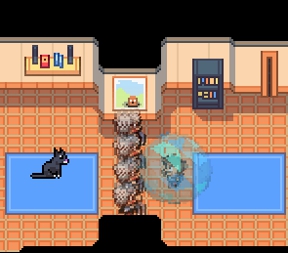 It's actually a fairly clever concept, making most of the compact stages a game of figuring out how to manipulate obstacles and energy sources in such a way that you can still pass through the exit. Where it ends up getting frustrating is that since the game almost completely lacks any text at all, you're sort of left to figure all the rules out yourself beyond the basic controls. That, combined with the clunky movement while trying to move objects around obstacles, and what feels like extremely strict energy availability in some stages, makes Lone Ghost & Cat feel like a game that's pushing back against you rather than merely challenging you. It's a shame, since there's otherwise a lot to like about the game, and not just its colourful pixel design. It feels like there's a lot of methaphor and unspoken narrative to the game's, uh, weirder elements, which is where the lack of text actually works in the game's favour. You're largely left to infer what's happening on your own, and combined with the satisfying little "ah-ha!" moments you'll get when you figure out how to use or circumvent a new mechanic or obstacle, that makes Lone Ghost & Cat an odd but merrily surreal little puzzle game well worth checking out.

Tip: The banner ad doesn't represent where you should be headed initially unlike what you might assume (if you're like me). You actually want to go into the red doors on the lit floors of the building instead.

The banner ad is never intended to give you actual direction. :) It's there to act as a simple screenshot and showcase different things the game has to offer. As always, you should explore on your own.

Stuck between a planter box and a stop sign at literally the very beginning. What do I do?

Gave up in third room. Knowing how to actually REACH a door would be nice.

Needs a brief tutorial showing you how to pull, push, recharge and when you can leave a door.

Sorry but this was annoying and frustrating from level one.

The repetitive music (especially because I was constantly restarting) started to grate.

I have no idea what I was doing, what I could do, nor why. Any sort of help/guidance would have made this more tolerable.

I like puzzle games, but normally I know at least where I am and what the goal is (even if it is "to escape"). In this game, that was hidden and so I was not really invested.

Perhaps if I had persevered I would have been rewarded, but I feel that this game was not made for me.

Okay, there needs to be a "run" button, because I can not keep up with those vampire grannies.

I'm about to finish it, since it has no save I simply never closed firefox and always used sleep mode of windows, since it would be boring to do all levels in one go. So far what I can tell is, the first levels are polished, and the 80% others were done incredibly quickly, with some with next to nothing required or a solution easier than the one that seems to be intended.

This game is a fine sequel to Dark Souls.

Figuring out the controls seems to be part of the puzzle. The "tutorial" in the first room is pretty uninformative, but it was just enough to figure out the rest.

Maybe I've played too many "the interface is the puzzle" games, but I wasn't bothered by the lack of a save function. Not only did the game take only about 15 minutes to solve, but once I knew each room's "trick mechanic", replaying the rooms to get back to a given point didn't take long at all.

To the person stuck in the third room:

To get through the second room, you would have had to figure out how to pass through the wall, then recharge to open the door.

Your life-drain aura is not just by contact - it has a limited range.
Solution:

Game mechanics: (spoilered since figuring them out is part of the game)

Energy: The game revolves around switching between material and ghost forms. You can interact with objects in material form, and you can pass through anything while in ghost form. Cats and grandmas have these forms as well. Materialize by holding SPACE near plants and cats that aren't fully ghosts, and become a ghost by moving things or allowing not-fully-materialized grandmas to absorb your energy.

Plants: You can move them and hold space near them to gain energy. It doesn't have unlimited energy, but it has plenty.

Columns: They open with switches on the walls. As with most things, you can't toggle switches while in ghost form.

Cat: Press Z to pet it and switch between it following you and staying stationary. Hold Z to move it. If you hold Z, it still counts as petting it once. You can absorb energy from it with SPACE, and you can open paw doors by moving it over paw switches.

Grandma: They absorb energy from you involuntarily. They also give energy to cats, which you can then absorb. Allowing grandmas to absorb energy is preferable to moving objects, since you can get the energy back via cats.

A lot of levels can be completed with much less effort than they appear to take. You can absorb energy through walls or even within walls, so you can often completely bypass the intended puzzles.