If video games have taught us anything in life, it's that no matter what sort of problem you're having, be it kidnapped princesses, disease, or vandalism, call a plumber. The hazmat-suited hero of Respire Games' Locom may not have a monogrammed hat or sweet dinosaur pal, but he and his trusty pressurized water tank can still navigate a booby-trap-filled sewer with the best of the world's plumbing superstars. Only he's not quite as athletic as Messrs. Mario & Mario, so instead of hopping and bounding like other platform game heroes, he lets his hose do the walking. Just aim his water nozzle with the mouse cursor, and click to fire a powerful stream that will send him soaring in the opposite direction. On the surface, that's all there is to it. But to those who knows the hose, our portly protagonist can run, jump, shoot, push, hover, and even fly, all with a single click! Just keep an eye on how much water he has left in his tank... It's a unique, simplistic control scheme that's both intuitive and tricky, and it makes for a mighty fine platforming challenge. 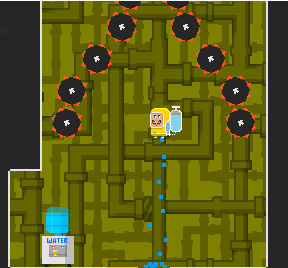 No game feels quite as nice as a physics-based platformer done well, and Locom's physics are as smooooth as buttah. The distance you aim from your character determines the power of your shot, and you move backwards in perfect accordance with Newton's third law. The controls are excellently responsive, and their simplicity of use makes the game wonderfully easy to pick up and play. While the game does have many raw platforming challenges, it also blends in several puzzle elements that revolve around manipulating other objects with your water. The puzzles themselves are simple, but require finesse of a different sort. You only have a limited amount of water in your tank, and while it can be refilled at checkpoints, you won't always be standing right next to one. Thus, you have to aim true and be efficient when completing puzzles, or else you'll empty you tank and get poofed back to a checkpoint. Thankfully, there are almost no penalties for failure, and you can keep trying to your heart's content. Occasionally, pushing switches with water alone can be a little finicky, but it's one of the only physics snags in the game. Truly, the game's greatest problem is that it's a bit short and over too quickly. But it's a compact experience that utilizes each of its simple tricks to their fullest, to become a minimalist game with maximal-est (is that a word?) fun. Locom is a high-pressure blast!

Fun, but far too short.

Awesome mechanic, but the fact that the Dev's site is dead is VERY disappointing. 4/5 stars.

I'm so bored with games posted on jig since months, I prefer more and more the russian sgi, so it's quite a surprise to suddenly see a very addictive game with good level design, just quite short.

I don't seem to be able to play this game. My screen looks like this (using Chrome): http://snag.gy/lmNz2.jpg

I've cleared the cache. It only happens with the odd game so maybe I don't have Flash updated or something. The setting used to be easy to find, but now it is not.

Can't beat level 2 because I can't work out that 1st drop by the saws.

I assume you are supposed to land on the top bit then drop before the upper saw kills you. Or there's a second when you can fall from top to bottom.

A second level REALLY shouldn't be this hard, surely?
It should be a boatload more forgiving.

As far as I can tell, you have to sort of feather your jet (short clicks a moment apart) so you stay in one spot in the air until the next saw is clear.

It's a little tricky, but once you get the hang of it it's not too hard. Also, it's hard to explain; I hope I did an okay job.

Level 16 has me close to rage quitting.

Get up along the wall is easier, and you can just shoot the button and then die

Site in dev at the moment. But you can find there a link to our Twitter account http://respiregames.com

There are 3 blades? Screw that then.

Not even REMOTELY possible.
Very badly thought out and not at all inviting.

I got by 2 of them. Then just NOPE'd my way out the game.

Shame, it looks like a clever concept.
Ruined by a REALLY stupid move on the 2nd level.

The levels requiring hovering are a bit tricky (ie level 2) - but not impossible. I found that sometimes single clicking worked best rather than clicking & holding.

Did find a bug though - on level 8 the top-right sliding horizontal door closed and pushed me into the grey area surrounding the game. Not a major issue - just restart the level - but could do with fixing.

The player should be kept in center of screen, this way, it gets too hectic/random with movement.