Loco Mogul is a new casually-oriented sim game from ApeZone. Accurately described as a cross between Oasis and Railroad Tycoon, your job is to survey uncharted territory, build a railway connecting towns, then run a train from station to station, picking up and delivering shipment carts as efficiently as possible. It's an ambitious combination of genres that plays both like a strategy game and a resource management title, complete with rail-themed music and visuals. 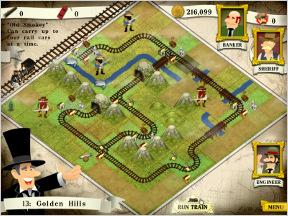 Each stage is broken into a 100-square 10x10 grid which is, at first, hidden from view. Your first task is to survey land by clicking blocks and looking for settlements. Finding towns is a bit like playing Minesweeper, as you'll slowly uncover numbers indicating adjacent squares where the people demand rail service. Surveying costs money, however, so keep an eye on your cash and don't waste it on sightseeing.

Once you've found a few towns you can begin to lay track connecting them together. The path you carve is entirely up to you, but because the second round of each level relies on efficiency, keep things simple and build shortcuts as often as you can afford to. Each settlement must also be serviced by a station which can be placed on top of any existing piece of track.

With stations placed and the railroad connecting your settlements, its time to start the real work. Clicking "Run Train" starts the time management portion of Loco Mogul. Each station is assigned a letter as are floating shipments atop each station. If a shipment has "E" below it, for example, that cart needs to be delivered to rail station E. You earn cash for each successful delivery, so maximizing profit is a careful strategy of minimalism. Take your time, however, as the only limitation to this portion of the game is miles traveled by your train.

After the level is complete you're given the chance to visit the bank and either purchase train upgrades or buy out investors. Subsequent stages also feature obstacles like hills or trees, both of which cost money to eliminate, forcing you to re-think just how important that remote hill settlement is for your business. 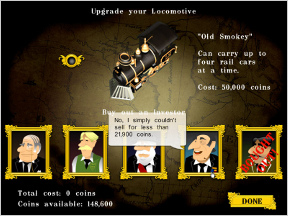 Analysis: Simple, original and engaging, Loco Mogul is everything a casual game should be. It's easy to pick up and play in short spurts, but you can just as easily whittle away an entire afternoon surveying land and driving carts around the map. It's a unique experience that manages to present a good challenge without frustrating even the most casual of players.

A lot of great extras are introduced as you play Loco Mogul, such as new terrains, bridge building, and helpers who you can discover while surveying. Unfortunately most of these are dispensed early in the game, leaving little incentive to play through later levels. In the end, the game comes off feeling a bit light. Replay value is still fairly strong, however, thanks to randomly generated maps.

It's great to see a game combine so many genres into one finely-tuned product. Switching between Minesweeper, tycoon and time management styles keeps things moving at a brisk pace, and you enjoy every minute of Loco Mogul as if you were a little kid playing with a toy train.

I play many casual games, and can usually figure how stuff works without many problems, but this one really stumped me when it came to the part where you pick up and drop off cargo.

However, when trying to perform these actions, my train would go to the station with the cart, then not pick up the cart. There was no visual change in the train to show if it already had carts attached, or what the problem was.

The tutorial didn't exactly cover all the bases either.

Overall, it looked like a neat game that I would love, but I'm reserving judgement until I can figure out my problem with cart pickup and delivery.

After the first few levels, it is very easy to have all upgrades and all investors bought out. After that, the game got repetitive quickly, since there was no goal. I was also making enough money that I didn't have to strategize on exploration later on.

@1:
The picture of the train across the upper left changes to show how many cars are connected, and where they are supposed to be delivered.

Thanks Jon - I'll give it another go.

I only quickly glanced at the review, and it's not OpenTTD (which isn't a casual game, to be fair). I'll stick to OpenTTD, though, since that one will run on Linux, Windows, and I think the Mac. And it's free (but you do need the original Transport Tycoon files, so you need to own a copy of that game).

I don't know - the visual representation is very nice and there are many details. But the gameplay sadly lacks.

I played it 2 times, first time to get an understanding of the gameplay. In this first attempt i uncovered around 50% of each map and then build a fairly large track, connecting 50-80% of the towns. But i ran quickly out of money, because the distances were too large and the miles the train would run were small. I only managed to run maybe 8-10 trains and then the map was over.

In the next run, i decided to uncover again around 50% of the map, but only connect 3 or 4 towns, making a small, one-way track. Also i choose towns that were close together. Lo and behold, that worked like a charm, because i could run up to 20 trains (towns were about 3-7 miles distance). Even more, i got always a 10 in customer satisfaction (no long turnaround times) and occasionally got up to 20.000 for a single transport!

So it was very easy - too easy - to pay the investors, buy both the bigger trains - and finish the game with around 900.000 cash left.

Effectively, the game punishes you for building big and long tracks - which is sad, because it takes out all strategy in the play. You simply stick to a small area and rack up the money there. Next Map. Repeat...

Overall the game has great potential, but falls short due to this balancing issue.

Hmm nice idea to combine "Minesweeper" with a rather "distance managment"... altough i recently bought Sid Meiers Railroads for 9€, and I would rather advice this, if you can that deal. Dunno what this game costs without "Big Fish Game Club" as they don't write that, just "as low as..". But everyone knows in the meanwhile I desperatly hate Big Fish :-/