In one night, Jacqueline Brown's life was flipped upside down, someone tried to kill her, and a close friend was killed. Things would be much smoother for her in this visual novel if it wasn't for the fact that as a result of a car accident she is left blind, mute, and paralyzed. All her friends and family members think she is in a coma, but she can still see light and hear every guilty word her visitors say. Locked In, by Lucky Special Games, is a free indie "whodunnit" mystery where we see, hear, and remember everything Jacqueline does. While most of this game is reading, in the end you are given the choice of who you should show you're still listening to... by wiggling a single finger. The entire game is played with the mouse, clicking to get through dialog faster and selecting what choice you make in the end. With eight different endings can you make sure justice is served or be forever trapped in a prison of yourself? 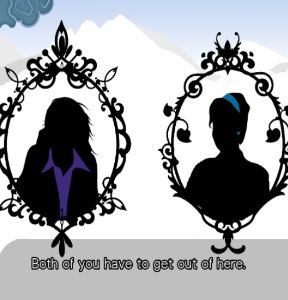 Locked In has some beautiful artistic ways to show us the world Jacqueline is now enduring. Everyone is just a silhouette, but only those she knew beforehand, such as her wife, sister, and personal assistant. When her room is lit, Jacqueline can see only white, so we are greeted with a large white snow covered mountains and when the lights are off, we are trapped in a dank cave. In addition to the artwork and the beautiful French music to set the mood the writing is really well done. She's no Mary Sue and makes no attempt to get you to like her. With her personality, the murder mystery is less of a "whodunnit" and more of a "who wouldn't". In the end, you have a chance to show three different people that she is not in the coma they all believe she is lost in, and a different outcome happens with different combinations of those you enlighten, so it really does come down to who you trust and if you believe Jacqueline has changed enough for redemption. Though shorter than some visual novels, with less than 10,000 words, Locked In is a great read with a bonus of you getting the chance to have your say in the end.

Windows: Get the free full version

Linux: Get the free full version

Well, that was reasonably interesting. One hint about the endings:

A big clue jumps out toward the end that won't necessarily get you to the "best" ending, but should help you avoid all of the worst ones.

It's Jacqueline's conclusion that the killer knew Jacqueline was going to see Brenda.

The only suspect who didn't know that is Sasha, so she'd be a bad one not to trust.

Also: given Jacqueline's orientation, seems like this would be a good candidate for the "lgbtq" tag?

This was really spectacularly written and executed. The music, sound, graphics, the whole feel of it was just perfect. Very clever, hope to see more by this creator! (I also like the "bragging rights" if you unlock all the endings!)