Here's a llama! There's a llama! And another little llama! What do they all have in common? They've all been captured! All of them! Happy llama! Sad llama! Mentally-disturbed llama! All of them are just gone! Only one llama remains. Fortunately for every-llama involved, though, it happens to be Gravity-Shifting Llama. And that means we definitely have a chance at rescuing all of those Llamas In Distress. Llamas In Distress (AKA Vertigo: Gravity Llama 2) is a physics-platform game by Jindo where everyone's favorite species of camelid will be flipping all over the place to find his friends and stop all the drama. 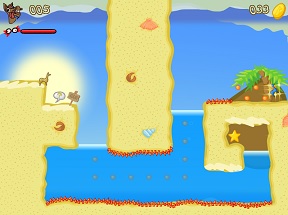 Move and jump with the [WASD]/[Arrow Keys], collecting coins and attempting to make it to the star at the end. In your way stands pits, spikes, and a plethora of enemies like jellyfish and slimes. While the latter tend to be vulnerable to a good bouncing, your main tool will be the [spacebar] which, when hit, flips the effects of gravity. Specifically, you can flip gravity one time (whether on firm ground or in mid-air) but cannot flip it again until you hit terra-firma (unless you are in water, which allows you to flips as often as possible). While completing levels, be sure to collect your glowing llama friends, forty of which in all. Additional elements are added over time: stars that required a certain number of coins to be unlocked, new weapons like lazer-eyes, new abilities like double-flipping, and a handful of mega-bosses. There are 12 worlds in all. The gameplay of Llamas In Distress isn't particularly unique as gravity games go (there's no denying that Gravity Duck got there first), and the rules for when you can or cannot flip end up being a little finicky in practice: It's one thing to fly off into the void because you deserve it, quite another when it involves weird changes in momentum because of thankfully-turn-offable particle effects. Still, its gameplay is fast and frenetic, with a genuine sense of bouncy fun permeating the whole experience. (I particularly liked the goofy introductory comic panels given before each of the worlds). Llamas In Distress' disposability is easily countered by its sweetness, and, in the end, should make for a nice coffee break of diversion. Good Lluck!

And now the Llama song is stuck in my head. Thanks.