In Meaka's surreal free indie horror adventure Living Playground, Octavio, Tony, and Pablo are just your average kids who also happen to turn into playground equipment, out to hunt up the best snails they can find at an old factory. When a shadowy figure attacks, Tony finds herself trapped inside and separated from her brothers, and following pieces of a story that might be even stranger than a bunch of kids who can turn into playground equipment. To play, just use the [arrow] keys to move and the [spacebar] to interact. While all items are used automatically wherever they're needed and you can only save the game in certain places, opening the menu with [ESC] allows you to access the Skills submenu, which lets you transform Tony to and from her slide form, which can help in certain situations. While there are no battles, Tony and the others can still take damage from certain things, and they have limited hit-points, so be wary of danger. Living Playground's odd premise may raise an eyebrow, but expressive artwork, loveable characters, and a story that combines classic fairytales with a look at family and identity makes it an impressive, engrossing game adventure fans should definitely check out. 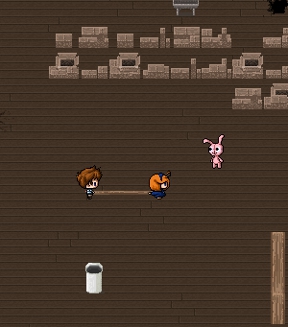 Living Playground bills itself more as a "morbid puzzle" than a horror game, which is mostly accurate... despite some rare well-executed jumpscares, the game is more creepy than actually scary for most of its run. While the area design does unfortunately tend towards large, open areas without a whole lot of visual interest, the atmosphere still manages to be excellent thanks to a moody soundtrack and the way the kids feel constantly menaced. It's hard to have children in any sort of narrative where peril is involved and not wind up with them feeling like token plot moppets, but Tony and her brothers are so genuine and funny you can't help but root for them. From Tony's sweet optimism and bravery in the face of danger to the way Pablo's bratty teasing hides his true feelings, and Octavio's selfless peacemaking that makes him seem wise beyond his years, Living Playground's main cast is so effortlessly likable that you'll forget about the whole "plastic" thing in short order as being weird at all... which is sort of the point. Of course, this makes the otherworldly wrongness they encounter that more alarming, and the core message of the game, and its views on humanity and family, tempers the storybook tone with just the right touches of maturity and warmth.

Living Playground isn't necessarily a difficult game, especially thanks to the way the game smartly uses appropriate items when needed so you don't spend your time trying to suss out "adventure game logic". The kids' transformation abilities are used sparingly so they don't feel like a gimmick, and the puzzles strike a nice balance between your usual "find the item, use the item" fetch-quests and a few codes or problems you'll need to use your brain to solve. That said, since so much of your time is spent wandering around empty areas, it still feels like there could have been a few more of those puzzles and encounters, though at least most areas are designed to minimize tedious wandering by including maps, helpful clues, or just multiple save points. Despite a few finicky moments, Living Playground plays very smoothly, making it all the more impressive that this is Meaka's first game. Living Playground's premise sounds like the sort of thing that could be a joke or just strange for strangeness' sake, but instead winds up serving the plot fantastically and tells a story with an unexpected amount of heart along the way. Even if you don't typically like "scary" games, Living Playground is still highly recommended, and is smart, creative, creepy and bittersweet in all the right places.

The following contains my thoughts on the good ending for the game, so obviously don't read if you want to avoid spoilers!

One of my favourite things about this game was that it didn't wrap up the kids' relationship with their mother in a happy bow. You don't get a lot of stories in ANY media, game, book or otherwise, where the villain doesn't ultimately see the error of their ways where they're in a parental capacity, and the protagonist is "rewarded" with their love. The Owner clearly did not deserve these kids, and the way Tony and the others even rejected calling her Mother, but also weren't destroyed by her rejection of them because that had each other, I feel sends a powerful message for people who have always struggled with feeling like they have to "earn" their parents' love. Despite how sweet she seemed, the Owner was repulsed by the kids because they "weren't normal" and thought they needed to be "fixed" when really the only difference between Tony and her brothers and other children is largely superficial. Living Playground used its initially bizarre sounding hook (kids who turn into slides, swings, and monkey bars) and actually used it to tell a smart, poignant story about personal acceptance and what really matters, as well as knowing that sometimes it's okay to turn your back on people and stop working for their approval, and I think that should be applauded.