[Note: This game is available in Pay What You Want format, including free! If you enjoy the game, please consider paying the developer an amount you think is fair for their hard work.]

Short but definitely sweet, Carter Lodwick and Ian Endsley's Little Party is a pay-what-you-want indie interactive art piece about the night your daughter decides to throw a party for a few of her "arty" friends. As her mom, you don't really mind... you're happy to help however you can. But she doesn't seem to need much from you... she's not a little girl anymore, after all. Use the [WASD] or [arrow] keys to move around the house, and hold the [spacebar] to look or tap it to interact when blue text appears. In general, once you've found and interacted with all the kids, their locations will change as the night progresses and you can look for them again, though occasionally you'll be given a more specific objective... though even that is sort of a grand word for the actions you take. Most often you simply watch, puttering around the house or taking the dog for a walk, and though your daughter and her friends are always polite and welcoming, they often don't even seem to notice you're there. It won't take you long to play through, but Little Party is a warm slice-of-life story that might make you better appreciate and understand the people who look after you. 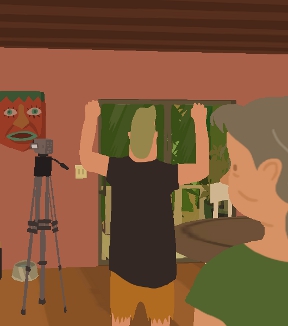 Superficially, Little Party is a game where nothing much happens. You make guacamole for the party. You watch from a distance while your daughter's friends work on their projects. You read a little on the couch. You're largely a passive observer in what is, quite honestly, a very quiet and laid-back evening, and a lot of the background is implied more than it is told. Despite that, and some frustratingly slow movement when you have to go longer distances, it still feels like it holds a wealth of emotion and humanity in it. Through some excellent use of sound, you're pulled into its storybook-like world, and even if she's largely silent, Suzanne's mother is easy to empathize with. I got a little anxious whenever I couldn't find Suzanne, even if nothing was wrong, felt like I was intruding when I accidentally wandered into her film-making friend Biff's shot, felt awkward and a little sad when Suzanne hurriedly dismissed compliments about her music... and that's the point. Little Party captures that feeling of hovering on the periphery of someone you love, taking care of them and being proud of them even when they don't always notice, even while holding it up against the way things used to be. But though it may be a little bittersweet, there's nothing really sad about it... Little Party is just another part of life, simple, warm, and satisfying, and a welcome departure from more heavy-handed drama that's well worth the fifteen minutes or so it'll take you.

Unfortunately, I did not like the controls AT ALL... not a lot of vision, and the "spacebar to look down" was slow. The whole game was too slow-paced for me. Very slice-of-life, but not in a good way in my opinion.

I thought it was a beautiful game, but it needs to be pointed out that it feels like interactive art first and foremost. Be sure to turn up the volume in order to hear a the great audio, which is synced up well with the movement and gives a nice 3D feel, which kind of juxtaposes with the graphic element and adds a somewhat surreal feel. I thought it was a nice way to spend ten minutes, but if you're looking for something more than interactive art with a mild story to it, you might want to skip it until you're looking for ten minutes of meditation. As an old person and a dad (though not of a teenager yet), I was probably more empathetic to the theme of the game. So consider that as well.

Anyways, I loved this game a lot! It was adorable, and the characters were relatable, especially the mother, even though she doesn't talk much, like the review said... I also loved how much detail there was in there. Even though it was very short and it's overall a small game, there were a lot of details, like all the decorations in the house and the paintings in the basement. I loved the aesthetic of the game, whith the colors and the other details.. Super nice game!