As warm and inviting as the perfect summer day, Rub's short, free indie adventure game Lisa, made in just two months, is the perfect combination of awwww and hmmmm. The only description it gives you is that it's about a dog and a girl, but I'd more accurately call it "adorable, whimsical afternoon simulator". You control both a peppy blue pup and (eventually) a young girl as you explore and solve simple puzzles around the lazy countryside surrounding your tiny farm. The dog follows your cursor when you click, while right-clicking makes it bark (hold to release a bigger, mightier woof!), and the girl moves with [WASD], with [E] to whistle and call the dog to her, and [spacebar] to pick up and throw certain objects. All of this is relayed via signs and images, as Lisa is a game entirely without words, leaving you to intuit what characters want, and you'll need to explore everywhere. It's the type of game that may only take you ten or fifteen minutes, but is so cozy and sweet you'll wish it was much, much longer. 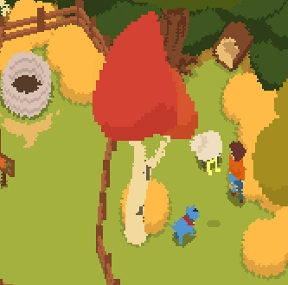 The only real flaws with Lisa is that the ending feels abrupt in a way that almost makes it feel like a demo, and it's also a little bittersweet in context compared to the happy romp the rest of the game entails. This is the sort of game we need more of, with its simple yet evocative visuals and comforting atmosphere, less something you "win", and more something you simply experience. It's big on charm, from the characters to the sound effects, and it leaves you wanting more, especially since there are only a few real puzzles. The ending just feels as if it comes out of nowhere, and is strange enough, even given the relative whimsical weirdness of the rest of the game, that it makes me feel like it might make more sense to the specific person the game was made "for", as Rub has said that the game was made for a friend. Despite that, Lisa is still a game that virtually everyone will enjoy their time with, from the clever contextual puzzle solving to the mellow mood that sort of makes you wish you had more days like that yourself. While you'll probably wish it had been expanded on more, Lisa is still the perfect pick-me-up whenever you need a dose of the warm fuzzies, and proof that not all games need to be about high scores and end games.

Fun game, but I'm stuck. Does anyone know what to do

once you transform into a cat?

Go through the log, and stick to the right. Use E at the end.

I can't play. I get the error message:
--------
ERROR in
action number 1
of Begin Step Event
for object obj_controller:

Is anyone having this issue too?

@Mike
How do you even become a cat?

Fed the bear a carrot? so that he coughs up a sheep, herded all the sheep to the pen so that the scarecrow gives me a key. I've unlocked the gate, seen the stumps beyond.

Have you taking a crawl through the log off by itself to the left of the farm? It may give you a clue... :)

yes, i had gotten through there, though not before unlocking the gate, so the 4 rocks, 4 stumps hadn't hit me.
and i've now figured out that the person standing on the smaller stumps presses them down. I've done BottomR, BottomL, Top R, BOttomL like the frog jumps, doesn't seem to do me any good. I've done that with the dog in the middle, even tossed the second carrot in the middle. Not sure what i'm missing

It's actually TopL, BottomR, BottomL, TopR. The little jump that the frog does on the stone counts as the start of the sequence. There's no need to have anything on the log during the sequence.

Walkthrough / as far as I could get:

Wait for the woman to whistle.

Hold down left mouse button to make the dog travel to where the cursor is.

Go to lisa (East,North, West, North roughly), press button, go right a bit and get lisa to pick up a carrot take the carrot south and west across the bridge, feed it to the bear - it will up-chuck a sheep.

Herd the sheep with the dog by barking behind it - herd it back to the pen next to the hut. Herd all of the other sheep in to the pen. Once 5 sheep are in the pen, the scarecrow will go a bit mental and give you a key.

The key opens the gate.

That seems to be it.

When you went through the gate, did you notice that the rocks around the big stump could be stepped on? Have you seen the frog?