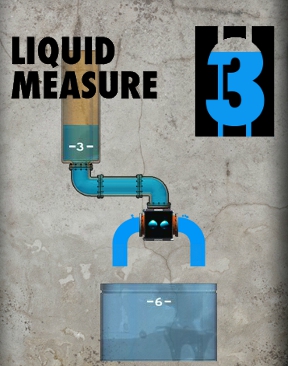 THE BLUE MUST FLOW. Smart Code serves up another installment in their fluid puzzle series with Liquid Measure 3, where the goal is as simple in concept yet tricky to pull off as ever. Just get the required units of fluid from one container into all the others in each level, using pipes, splitters, overflow, and more. Drag the flashing containers and pieces around to where you want them, then flip the start/stop switch on the right side of the screen to see if your solution gets every drop where it's supposed to be, without causing an overflow. So far so standard, right? Well, what about teleporters? Magical mathematical multipliers? Even... uh... anti-matter bombs? Hmm. Look, I uh. I'm not saying I doubt your word that you're a plumber or anything, but can I see those credentials again?

Though Liquid Measure 3 doesn't do anything drastically different from its predecessors, in a time where games are sort of married to the concept of becoming more and more gimmicky in an attempt to innovate it's always great to see a game that proves a clever mind can make a simple concept just as engaging and challenging. While the last few levels here are absolutely bonkers and the game likes to trick you from time to time by giving you more pieces than you actually need, it's the sort of game that's just challenging enough to keep your brain working with math and water flow for a while. The downside is that some of the elements are annoyingly fiddly as to how they'll accept water (with a pipe or free-flowing?) and if you haven't played the original games, you're not going to know what an overflow tank is or how it works when it pops up. The teleporters and bombs add an interesting new wrinkle, but they're not actually used as much as the multipliers and standard splitters are. In a way, that's a good thing, since Liquid Measure is at its best when its tricking you up with simple math and a maze of pipes. You probably won't learn how to do your own plumbing through playing this, at least not in any way that wouldn't result in needing to make an emergency phone call to an actual plumber immediately afterwards, but Liquid Measure 3 is a fun puzzle experience that knows what it does best and how to deliver.

Thanks to Roland for sending this one in!

Dunno how to pass this on to the owner/creator of this game, but I found an interesting glitch.

If you put a funnel over a horizontal pipe... the funnel steals the liquid out of the pipe... allowing you to potentially shortcut levels.

I found another problem: the game keeps crashing on me on level 24.

another 'glitch'... if you set water up to flow OFF the screen... like do a turn and run the pipes up to the edge of the screen... the whole display dissapears.

That sounds kind of like what happened to me on level 24. Maybe that's what went wrong.

The flashing is annoying! The mechanism in the first 2 to indicate a movable part was much more pleasant and equally effective.

I'm really liking this game so far. I'm only on stage 22, but some of the new game mechanics, albeit a little tried, make for some interesting and mind-bending puzzles. The puzzles really amp up in difficulty about half way through, but not enough to render the game unfair.

There are a few glitches here and there, like Ashiel mentioned. Also, I really wish there was a separate box to keep all the playable pieces in instead of just having them strewn across the screen.

Regardless, this is probably one of the best games in the series.

Oh, and the music is fantastic!

Evidently the game counts a solution as "wrong" if it's not EXACTLY the solution the creator intended, even if it works for the requirements given. For example, this is clearly a solution for level 18:

but the game keeps telling me it's wrong.

I think your solution isn't accepted because of the dead end at the bottom right.

Where, oh where is the mute button!

I cannot find it while playing levels at all.

This is probably because of one of two reasons. Either you're sending water off-screen (glitch that causes everything to disappear), or you're putting too much water in one of the tubes. level 24 was probably designed and tested poorly, because it allows you to create more water than is necessary to finish the level. If you waste none of the water (it all gets into one of the containers, the game doesn't know what to do, and effectively causes you to both win and lose at the same time.