Smart Code's superlatively fluent physics puzzle has turned toxic, and this is a good thing. Really. Liquid Measure 3: Poison Pack transforms the pipe-building, fluid pouring, quantum teleporting and bombing you know and love, giving it a more potent purpose. Arrange the pipes, valves and other elements, then turn the start switch to direct glowing green liquids into their respective containers, measuring properly so you don't spill or waste any of the hazardous fluids.

Play all the Liquid Measure games: 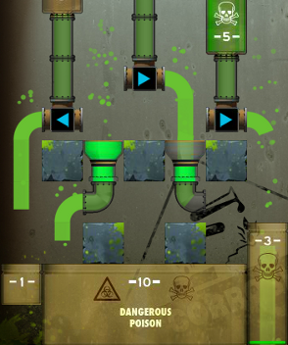 As an expansion pack, it has the gameplay of Liquid Measure 3 only with 30 newer, glowier levels. You also won't find many instructions here and the challenge ramps up early on, leaving you scratching your head over seemingly impenetrable blocks while an increasing number of pieces forces you to construct byzantine plumbing to reach success. Although it sounds like a simple plan and each level can in theory be solved in less than a minute, Poison Pack is packed with enough experimenting and rerouting to tease your brain for most the afternoon.

Can't even get the first one...

Had to look at the walkthrough. After that, I facepalmed.

Aargh. Those levels with quantum teleports always stump me. I just can't think with portals.

Like I said on ArmorGames. The music for the levels themselves is a big problem for me. That track is way too creepy. I keep having trouble concentrating because it makes me feel like any minute now some monster is going to jump out and stuff my severed head up one of these pipes.

It is sort of creepy, isn't it? :) Anyhow, there's a switch in the upper right corner to turn off the music if you'd like.

Spent ages on level 6 until I realised there was a piece hidden in the shadows at the bottom of the level!

Just to lend a contrary opinion, I don't find this harder than the previous incarnations, and apart from the moodier atmosphere, I'd call it the same game. That's fine with me, because I like these, and I think those of you who were good at the first few will be equally good at this one. I'm halfway through, and most levels take me about 3 minutes. A couple take much longer: tinker a while, go do something else, check back in... ah, there it is! The game would be boring without that variation.