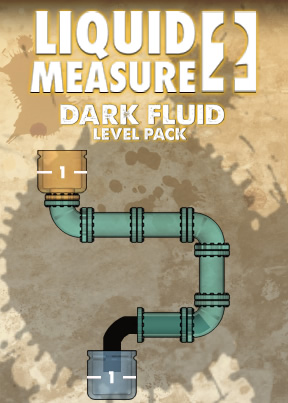 Usually when you hear that a game has a bunch of new water levels, it's a call for trepidation, especially when the liquid appears as brackish as it does here. However the Dark Liquid Level Pack, an add-on to Smart Code Games' popular physics puzzler Liquid Measure 2, is just as refreshing a drink as the original. Not much is changed, but, as my amateur plumber dad can tell you, it isn't wise to fix a pipe that isn't broken.

As before, the goal of the game is to direct flows of water into the proper receptacles without spilling any. As you might expect, the (now suspiciously-dark) water flows downwards unless directed by another implement. Using the mouse, drag and drop the various items to set up the liquid's route. In addition to the standard pipes and pots, there are other pieces available for use, including Overflow Pots, which catch a certain amount of water before releasing the extra, and Water Splitters, which splits the stream into two equal streams starting with the direction the arrow upon it is facing. You click the pipe on the right side of the screen, or hit the [spacebar], to turn the water-flow. 31 new levels are included, so water you going to do?

Level packs have a not entirely unjustified reputation for being "just like the main game but harder", and the levels included in Dark Liquid don't break this trend. This isn't entirely a bad thing: I quite enjoyed the original Liquid Measure 2, but felt that the easy challenge level and high number of tutorial levels worked against it. Dispensing with unnecessary instructions and ramping the difficulty up to "medium" is exactly what the series needed. Certainly, some levels are gimmes, but there are some real head-scratchers here, and it's for the best. I would have liked it better if the challenge was more progressive (it often felt like super-easy levels came right after the more difficult ones), but all in all, it's a satisfying addition.

There remains little to say. If, like many out there, you enjoyed Liquid Measure 2, you will enjoy the additional levels, and that is that. There seems to be little reason for them not to have been included in the original version, but I find it hard to get too annoyed at having more of a fun game to play. Now, if you excuse me, I think I hear my faucet dripping...

I will refer to the curved pipes by the direction water flows going from the top opening to the bottom opening: down-and-left; down-and-right; right-and-down; left-and-down.

My only complaints about this game are that it doesn't seem to save my progress between sessions and that the animation is so danged slow once I click start. Otherwise, great fun!

Fun, but still not a lot of challenge. Is it expected that all the pieces are necessary on each level?

@chipmunk
I've played through level 26, and so far, have only encountered one extraneous piece on one level.

Same as MmeTurbulence, I've finished levels 1-26. However, I had extra pieces on about half the levels. It's fun to make shapes with them, even made a U and 3/4 of a circle. The red arrow pipes were all needed I think.

Anyway, just wanted to say that level 26 was pretty cool and challenging. Onward!

I will refer to the curved pipes by the direction water flows going from the top opening to the bottom opening: down-and-left; down-and-right; right-and-down; left-and-down.

I like your solution to level 29, MmeTurbulence, but it can be done without using all of the pieces available.

Use a "down and left" pipe to move both of the 4 tanks into a single stream dropping to the 1 reservoir. Use a right starting splitter to direct the water leaving the 1 reservoir; this will get you four water on the right, three on the left and fill the two tanks on the left.

That should leave three pieces left over: two splitters and a right and down pipe.

I managed to complete level 31 with four extra pieces left over. Tutorial below. :D

On the third jar from the left on top (a 3-unit jar), connect one down piece and one elbow facing right (so that water is routed to the 2-unit overflow bucket).

Follow the 2-unit overflow bucket down and attach the splitter.

(The following steps will require you shuffle the 4-unit bucket and two 5-unit buckets around to get everything to fit. Just move them out of your way as needed.)

Move the 4-unit bucket to the far left and one row up so that it sits directly under the red X block.

Move one of the 5-unit buckets to the red X block's immediate right.

Move the final 5-unit bucket above the other 5-unit bucket so that it is directly below the immobile pipes. It should be placed as far right as possible.

You should have four pipes left over, two down pipes, two sideways pipes. Start your contraption and watch it complete.

Also, THANK YOU for taking screenshots of every level. The video walkthrough linked in game is very annoying if you don't want to use it on every level.

A bit on the easy side, but fun!
And now and then a surplus of pieces and valves.

Like some others I found the game fun but there were several levels where I had extra parts left over. I guess some questions for the author(s) would be [a] did you (honestly) intentionally make the levels have more than one solution? and [b] how about a scoring system where you can get points for using less parts? I was going to suggest points for speed since obviously fewer parts means less travel time for the fluids, but one of the things I like best about this game is no time pressure.