We've got a short Link Dump this week, fillies and gentlecolts, and those of you who entered in last week's Knytt Underground contest and won will be getting an e-mail from Nifflas himself within the next few days. Winners will be posted later today on the original contest page. But for now? WE GAME. 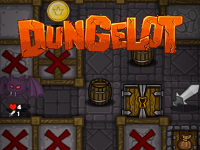 Dungeons Need Balance Too Dimitry Mitrofanov's free browser roguelike Dungelot is awesome, and with recent updates it's even awesomer! The balance has been tweaked, bugs have been fixed, and there's a new hero available to be unlocked, with even more content on the way. While Dungelot lacks a tremendous amount of depth, it also lacks the steep difficulty curve a lot of roguelikes have to offer, making it sort of a perfect introduction to the genre if you've been meaning to try it, or have a friend you think might like it. It has a simple, breezy playstyle, colourful graphics, and it's one of those games that fits perfectly into a coffee break... or into a larger time frame when you're supposed to be doing something else. 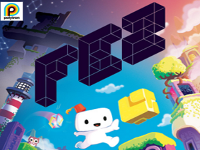 I Port to Other Platforms Now. Other Platforms Are Cool. Polytron's smash-hit XBLA puzzle platforming adventure Fez is coming to other platforms. That's it. That's the extent of the news. Dropped New Year's Eve in a post entitled "State of the Polytron", the news is both incredibly exciting and frustratingly vague. What other platforms? How much? If we wheedle really hard will you give it to us right now? We'll have to wait to find out more. Maybe in the meantime, you and I should use this as an excuse to start working through that colossal backlog of games I know we both have. I think after eschewing the many brand-new games I received for Christmas to replay Phantasy Star IV, I can probably admit I have a problem. 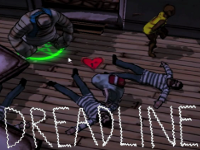 A Backpack Full of Harvested Hearts and a Spring in Your Step Being a kid is hard enough. Being a kid who thinks he's a ghost and massacres people with other monsters throughout time and space is even harder. And weirder. If, like us, you thought Eerie Canal's upcoming indie RPG/real-time strategy gem Dreadline sounded awesome, now's your chance to help it come to pass by donating to the official Dreadline Kickstarter. Headed for PC in October of 2013, the game hopes to add multiplayer and port the game to other platforms if the project succeeds. Sounds good to us! 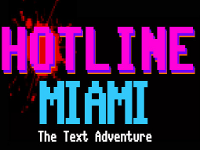 Don't Get Too Excited No, Hotline Miami: The Text Adventure is not an actual playable interactive-fiction version of indie juggernaut Hotline Miami, and in fact this parody feature by PC Gamer shows you just what a bad idea it would be if it were. Or maybe it's a great idea. I'm not sure, since this perfectly captures what it's like to actually play the game. Well, almost. All you need is a steady stream of expletives, and a well-meaning friend or family member hovering nervously over your shoulder to suggest you maybe "play something you have fun with" so you can whip your head around and snarl "I AM HAVING FUN" before dying another 30 times in fifteen seconds.

I've been wanting to play Fez ever since watching that documentary in the last Humble Bundle. Hopefully the porting won't take long.

Have the contest results been posted? Have I missed them?

Wow - my page must have showed a cached version. I refreshed and was *TOTALLY* excited to see I was one of the winners! Thanks, Jay, for the reply here, as well as the great site!

Been dropping by for years, and don't regret a moment! ;)